I know this blog is long overdue for an update.
The last year and more have been full of mostly amazing changes.
My chemo was completed near the end of last May.  I'm still recovering from the effects of the chemo and the surgery that preceded it. I'm working hard to build strength, but it's a great challenge.
Most other aspects of my life have undergone tremendous changes as well. (My most recent CA-125 was about 5, which is even less than it was at the end of treatment.)
My daughter successfully defended her thesis for her master's at New Mexico Tech. She did so not only with solid knowledge but also with great poise. She accepted a position with Caterpillar in Illinois.
Over Labor Day weekend I came along to help drive the moving truck, although at that point I was still too weak to be of much additional help. We stopped to see a childhood school friend of mine who had put her home up for sale.  I made an offer for her home and returned to New Mexico to prepare for selling mine.  My mind is still boggled from all that happened and how it happened and how quickly it happened, since I had planned to put my house on the market about now and hoped to move this coming summer.
Suffice it to say I'm now happily settling into my home in El Paso, not in Texas; the other El Paso!
The downstairs will be my quilting/sewing/knitting/cross stitching studio as soon as I get it organized.  I do a bit of unpacking and organizing every day, but I still have a way to go to regain the strength I had before the cancer journey.

The only needlework I've done includes finishing stitching of one small piece begun during chemo and some knitting.
My previous post shows a chair of cross stitch floss. (That chair now resides with my daughter.)
Here's a chair of yarn, although it's just what I have out to make some choices. (This is an antique oak office chair that I happened upon here in Illinois.) 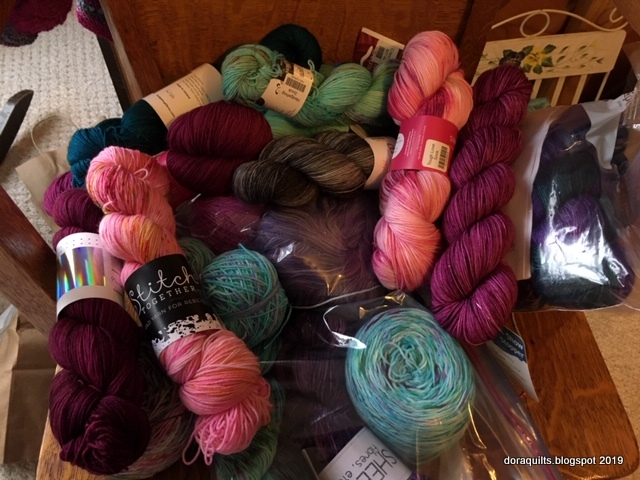 My latest finished project is still unblocked, but it's a shawl using 150 gr. of yarn from Sweet Georgia. It's designed by Tabetha Hedrick, and the yarn pack and pattern are available only from shops. 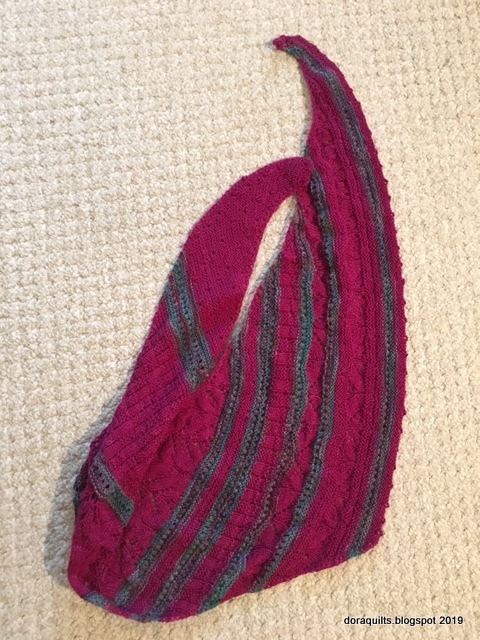 As I neared the end of the shawl, I grew very tired of the lace pattern, so I substituted other patterns from the shawl.  I bound off with a picot edge that was not part of the pattern rather than with the contrast yarn.
Here's what I have left. 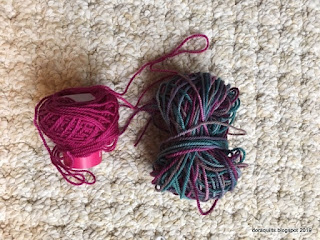 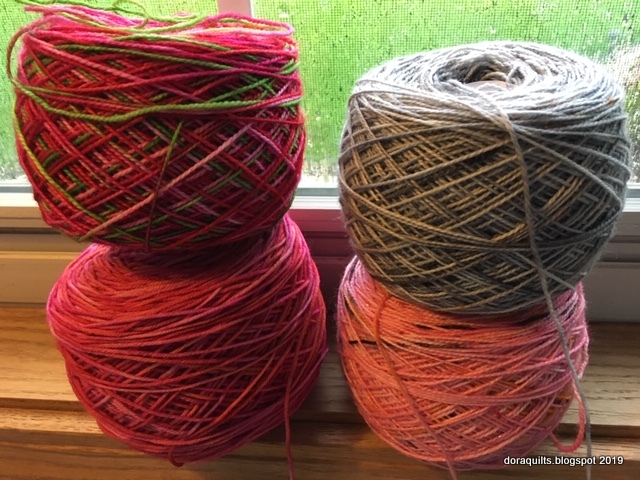 While all the cross stitch shops are gone, we are fortunate to have two great knitting shops in Bloomington.

We're having another rainy day today; quite a change for me after 30 years in the desert!  I find I love Mondays during retirement.  I try to stay home and do things around the house as well as some knitting. Getting my huge studio space set up is still a goal since I lack the energy and strength I need, and the unloading people mixed boxes marked Master Bedroom with those marked Quilt Studio. The other days of the week get scheduled quickly and include chiropractor visits resulting from my unplanned attempt to fly across some ice at the end of January.  (Yes, I arrived just in time to  unload before the polar vortex descended with wind chills of -50F. In fact, the six guys I hired unloaded everything in less than three hours, and the rental trucks were returned as the snow and ice struck Central Illinois. My home is nice and cozy, so I didn't much mind since I had so much unpacking to do.)

I do miss my friends from New Mexico, and I'm enjoying connecting and reconnecting with people in the area where I grew up.  A lot of things have changed in my community, but a lot of things have endured and/or improved.
My 90+ year old friend Barbara assured me I was headed for a great and fun adventure.  She's right.  My days are filled with joy.

Oh so glad to see your post today!!! Still keeping you in my prayers. I hope your strength returns soon. Moving is exhausting so I can only imagine how tiresome it was after chemo. Just remember...baby steps! I'm in KY and we had a cold winter as well. So glad that spring is here!
Blessings
Kristie

Welcome back from your journey through life's adventures! Hope you recover your strength and are able to enjoy your new studio in no time!

It's so nice to hear from you, Dora! I wondered how you were doing. I'm so glad to hear your chemotherapy is over and you're recovering. I hope you enjoy your new home. Your studio sounds so big! Enjoy and keep us updated!

You have been on my mind for some time, wondering how the chemo had worked out and how you were, so it's lovely to see this post. Take things easy and build your strength for the exciting next chapter. Congratulations on a successful move, and to your daughter on her accomplishments! Looking forward to seeing what you create.

Yipee! You are blogging again. You know you've been missed. I hope you get stronger every day.

I'm glad to see you back! And I hope your strength returns steadily and reliably.

I couldn't believe it when I saw your post in my sidebar !
Welcome Back !!!!!!
How exciting to hear of all of your life changes ! So glad that you survived your battle ........ I know that you will regain strength before long, and I just love thinking how snug you were in your 'new' home this past winter while you readjusted to that type of weather.