I finally just ripped the binding off the Sunny Day Quilt, cut new binding and piping, and sewed that on!
I finished at 10 p.m. last night, took it to church, gave it to another church member, who will pass it on to the mom-to-be. I am so glad it is done, even if it did take me several days to get the binding ripped off. You probably heard the rippet, rippet, rippet. At least I now know what/how to do and what/how not to do!
Posted by Dora, the Quilter at 7:22 PM 0 comments

The baby quilt is finished. I'm including some pictures of the back of the quilt so the quilting can be seen. For the backing I used a lovely warm yellow from Debbie Beaves Sunflower collection. It photographed as more of a beige, but it's really a warm, buttery yellow. 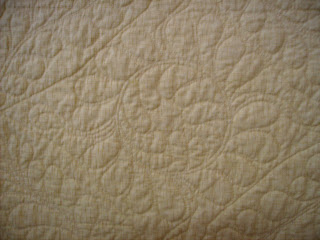 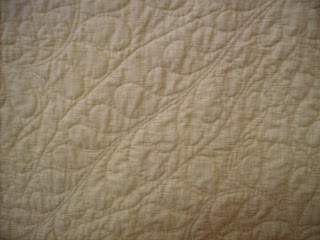 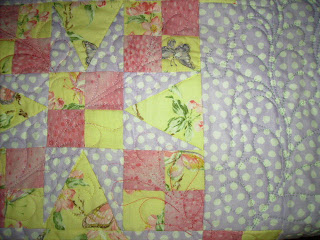 The quilt top was made with Blossoms and Birds, a yellow Northcott print that is at least ten years old--came out of my stash. It was originally intended to be something for another child, but that didn't work out.
The lovely lavender/white polka dot had been in my stash even longer.
The pink was a more recent purchase.
For the quilting I used lavender, pink, and light green threads. 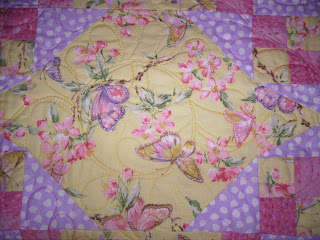 Here's a detail of the snowball blocks. These colors are truer to the fabrics. 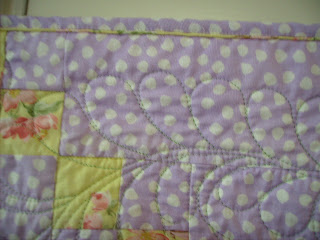 I used #2 DMC cotton to fill piping next to the binding. 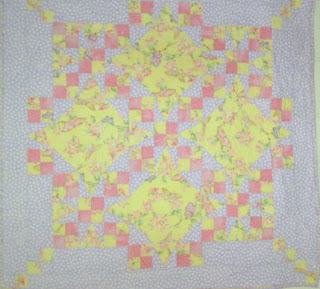 And here is most of the finished quilt. (I couldn't find a location where all three colors would photograph true. The pink and yellow are pretty close, but the lavender is really grayed in this photo.)
One more finish. Now it's back to binding for the blue butterfly quilt.

A Quilt and My Daughter

I finally finished the binding on the baby quilt for Stephanie. I'll have to wait to take a picture because it's in the washer right now.

My daughter is spending the night with a friend. A few minutes ago she called to tell me she loves me, reminded me to put out the garbage for tomorrow's pickup, told me she's staying up for another hour until the Amish bread is done baking, and suggested I might want to go to bed now. I laughed and said, "Yes, mom."
Her response was, "Well, older people need to get their sleep."
I just said it's actually the other way around; the young need to get their sleep, and then I laughed some more.
There's such a fine line between meddling, judging me incompetent, and just trying to be helpful!
It's nice to be loved!
Posted by Dora, the Quilter at 9:17 PM 0 comments 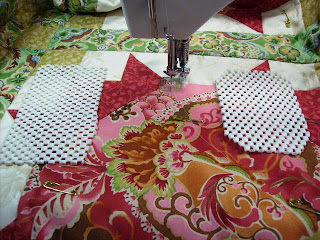 The other day someone else who quilts on a domestic sewing machine (not a long arm machine) was telling me how tired her hands and arms were after spending the day quilting. I quilt on a 36 year old Huskvarna/Viking workhorse (unless I quilt on an H/V that's even older). In the past I've tried all kinds of hoops, non-slip gloves, etc., but for the past few years I've been using something much simpler: two pieces of non-slip, rubberized kithchen-shelf protector. Much cooler than gloves; no need to grab and, thereby, distort the quilt-top; makes quilting possible even when it's a hot day; and I can quilt all day if I need to. 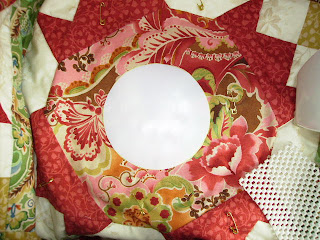 Yesterday I needed to draw a circle in the middle of the patches, but the old marker I had found to mark four circles on another quilt was too dried out to mark on this one. I made a run to Alco, my favorite hometown variety store (used to be known as Duckwalls), but they had no blue erasable markers. I cut a circle from a roll of shelf paper with light adhesive and stitched around that, peeled it off, and saved it for the next patch.

I do quilt a lot of feather variations; however, except when I need things like a perfect, or nearly perfect, circle in the center of a block, I don't mark the quilting lines; I just quilt--the payoff from decades of sewing and quilting practice.

It's been a very hectic month since I last posted--which is why I haven't posted. My teaching assignment for next year has changed several times. I'll be at the same school, although I had to move all my teaching "stuff" (probably a couple of tons worth) to a different classroom pod. I'll still be teaching special education students, but it's likely I'll be teaching a different level, most likely students with severe and profound disabilities again. I pointed out to the principal that the district has just spent thousands of dollars on training and new materials, so I'll be allowed to teach a two-hour reading/writing block to students with less severe disabilities. Well, that's how things stood on the last day of my contract; anything and everything could change by August.

Must run now and prepare and sew on some bindings for a couple of gift quilts. I'll show them in another post when they are finished.