Sunday I was gifted with this surprise: 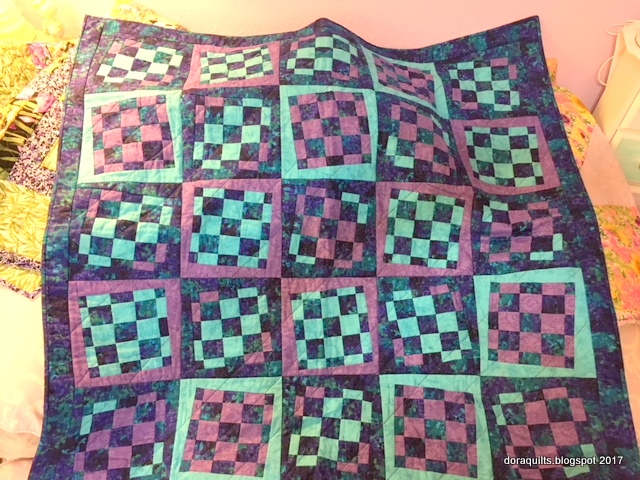 This prayer quilt is a gift from the Victory Prayer Quilt group at my church.  (For reference, my wals are lavender, not pink, and there is lavender in the quilt peeking out on the right.  The photo was taken with my phone and took all night to travel to my in-box--which reiiterates why I need to find my camera!)
It's beautiful--and I'm guessing it is the work of Judy, for whom I've quilted many prayer quilts over the years.  I've been one of the makers in that ministry since it was started many years ago (maybe around 2004 and 2005).  I'm blessed to receive it.  It will travel to the hospital with me on Friday.  Surgery has been moved up 1/2 hour; we still need many prayers for the DaVinci robot, because it's currently booked for someone else.  I did ask that the surgeon continue to let them know he wants to use it if it becomes available. It could significantly decrease both my healing time and my time in the hospital.

In the meantime, I'm praying, nesting, and avoiding places with sick people.  I do love just being home!

I hope for one or two more year's end quilt finishes since they need only binding. I knit in spare moments but am not sure I'll manage more year's end knitting finishes.

I'm back. That was a much longer break than I intended--due to camera issues (it's disappeared)! 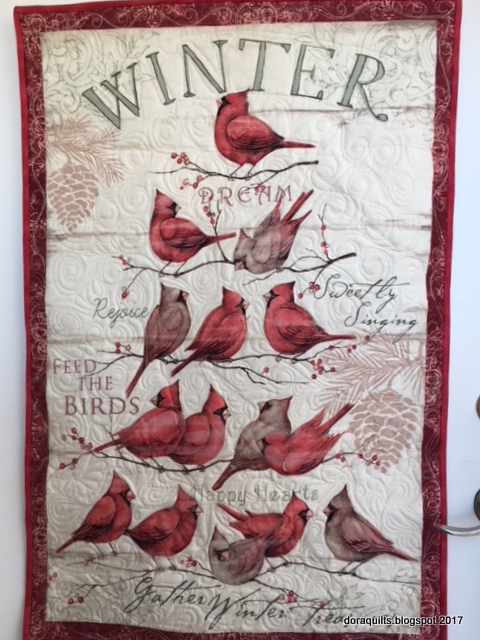 I just finished quilting and binding this and hanging it on our door.  Pre-printed panel made it great for quilting fun. I think it's the only finish (or start, for that matter) since the unintended blogging break that started in June.

In the meantime, the Engineer returned to school and is half way (maybe farther) through her master's degree.  I was offered a new job, which I accepted, but have worked there for only one week since my previous school refused to release me earlier. I was in physical therapy for quite a while because my lumbar spine and sacrum kept locking up (and because it took five months to get into the orthopedist who specializes in backs). There is some lumbar deterioration that is common with aging, but what an MRI showed in addition is a pelvic mass, which raises concerns for ovarian cancer. Blood markers for cancer are only slightly elevated, CT scans show the mass but are not definitive.  Therefore, next Friday, 12/29, I'm scheduled for surgery.  In addition to praying for healing, we are praying the DaVinci computerized surgery and surgery room become available--since five small incisions would heal much more quickly than one vertical incision. (Sick days do not transfer to new jobs, so I've lost six weeks of sick leave and have only five days, which will not be sufficient.) My daughter doesn't have to return to university until January 22, so that is a blessing.  In the meantime, I'm praying a lot, keeping things calm and sweet, and enjoying all the small delights and music that make the holidays so special.  I welcome additional prayers for healing and for the availability of the DaVinci since it's scheduled for weeks out and we need it to become available for this coming Friday.

I hope to post more of what I've been making and working on soon.

Happy knitting and quilting, and have wonderful joyous holidays!