FNSI, Very Late, and Lots of Other Things 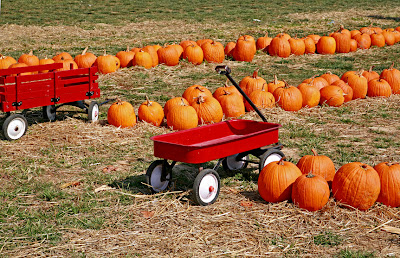 What happened with FNSI is that I did not even get an adequate amount of fabric cut to take a photo!
Aside from that, a lot has been happening.
Two weeks ago I had a job interview.  One week ago I accepted the job (actually about 5 days).  Yesterday I resigned from my teaching position and asked to be released from the 30 days' notice.
Last night the personnel director reported that the superintendent agreed.
Today I went to work and was told to gather my things and leave.  I had to negotiate being able to tell my students and say goodbye to them.  Interesting, since the district's excuse for so many things is that we have to put the students first.  I did say a very brief goodbye, and my heart aches for the kids who cried.  I wasn't even allowed time to write a note to send home with them.
Tomorrow I will report to my new job--much smaller school [a state chartered school in ABQ].

Because of being sent home early I was able to troubleshoot some computer problems with Wi-Power.  The router was bad, but under warranty, so I'll have a new one in a few days.  In the meantime my computer is tethered by a blue cord (remember those), so the placement is pretty inconvenient and I'll be spending more time doing something else--catching up on some reading, perhaps?

New job means two hours more choices every day since I won't be spending those two hours commuting.  I'll be able to go to bed later and get up a little later (and have more time to see my Sweet Teen), so I hope to have an extra hour for reading, etc., and an extra hour for quiltmaking.
Autumn is here.  Freezing temps every morning.  Mums are barely surviving, but pansies and dianthus have not yet given up their little ghosts. It will be interesting to see how many ghosts and goblins we have this year.  We've had none some years--and one year we had six! 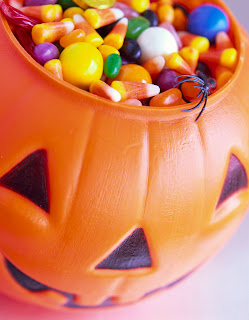 I hope all my readers have a sweet old-fashioned and delightful Halloween!
Happy quiltmaking...... 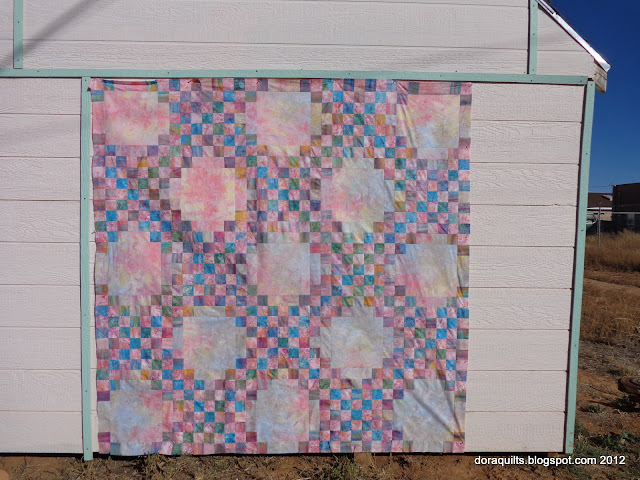 Actually, I meant to post last week while it was still in strips, but just did not manage to do that--which meant I had no post to link to the blogs of some favorite friends.

It was very windy when I took the quilt outside to be photographed--so you can see where the wind was pulling against the pins.  I should qualify that "very windy".  It was what much of the U.S.A. would call very windy.  For where we live, it was a typical autumn afternoon wind. 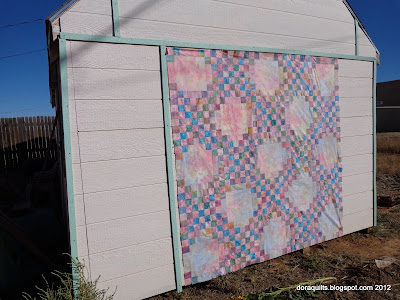 For some reason a lone sunflower had grown and bloomed by this building and then fell to the ground from its own weight.  I tried to get the pretty head in the photograph, but it was just too sunny for me to tell if I had it in the pictures, and I missed it. Leaves are rapidly flying off trees around here. 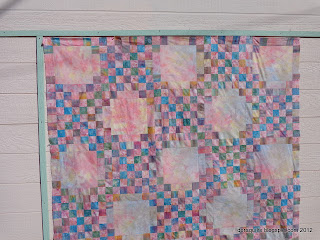 It's a bit sad that photographs can't capture the true colors in these fabrics--and the angle of the sun didn't help either.  However,  I can see that the quilt has good movement, and I'm eager to get the border pieced and applied so that I can get to my favorite part, the quilting.

And, pictures from shortly before last Saturday's Homecoming Parade... 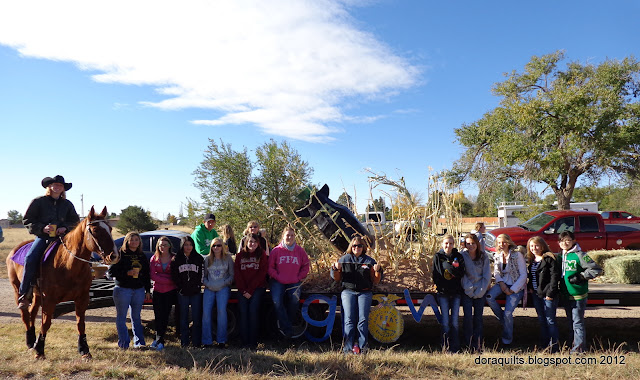 Yes, skies were that blue.  And yes, the pictures were taken from the non-crowd side of the float--no idea why they did that!
Where I grew up, we built our floats of chicken wire shapes stuffed with tissues.  You can tell we live where it's windy and have to use bales of hay and straw because light stuff will get caught in the winds and blow away!! 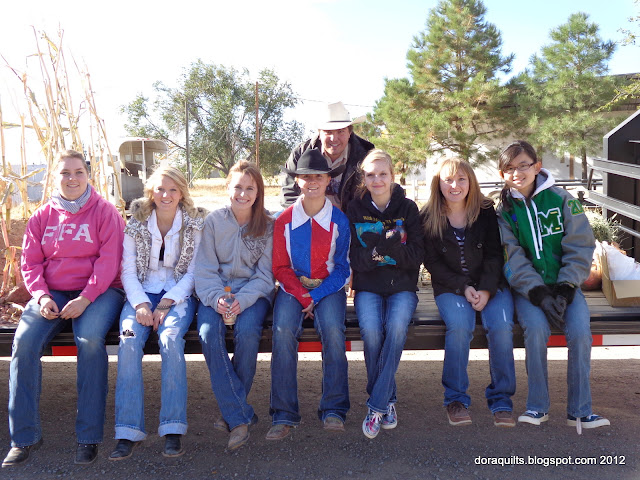 This is this year's officer team--I'd say the one young man who is on the team is enjoying himself!  FFA has three advisors, but only one made it into the picture.
It was so cold that a friend and I watched the parade while cuddling in coats and quilts.

I have no pictures of the homecoming dance attendees, and Sweet Teen forgot to ask anyone to take their picture.  The couple was accompanied by two friends who have moved on to other schools--and they had to jump through a few hoops in order to be able to take them along.  Very different from when I was in high school and we invited past classes to the homecoming game and the homecoming dances.  (Kind of sad that they no longer do that. Or, maybe they do that in other parts of the country but just not here.)

This week Sweet Teen and two classmates are competing at the National FFA Convention in Indianapolis and will be joined by most of those pictured as well as other members of our local chapter.  It will seem strangely quiet around my home--but I'll have plenty to wear me out during the day since it's also the week of parent teacher conferences at my school, which will means I'll return home even later than usual each day.

When I get a chance, I'll link to Judy's What's on the Design Wall and Connie's Freemotion by the River.


Here is one of the the twelve blocks that resulted from today's piecing..... 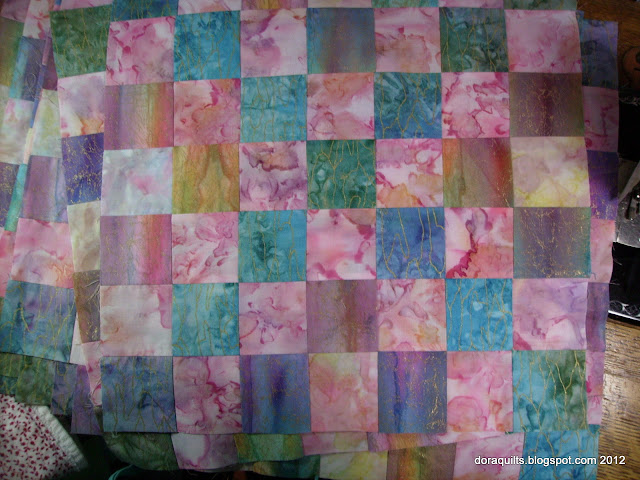 along with some others peaking out below it.

I started with this using small pieces of fabric to label the rows I had cut over the weekend--actually finished this part of the cutting this morning. 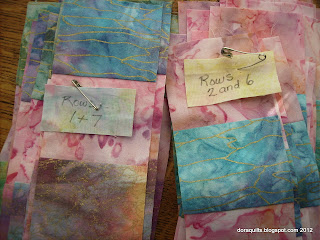 and progressed to this... 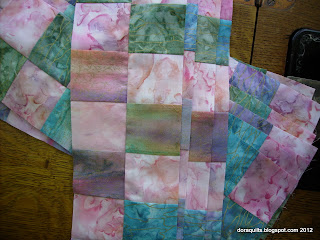 until I got to these: 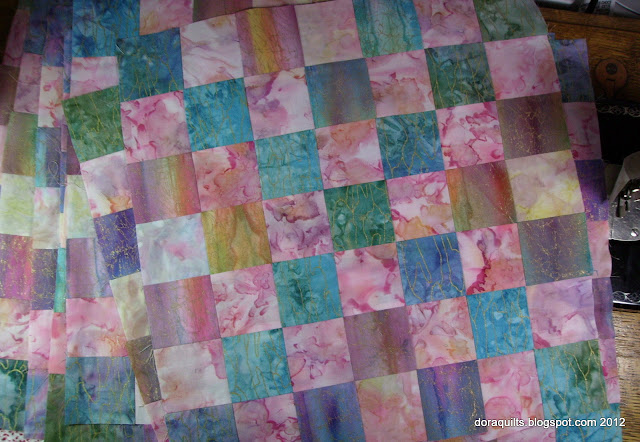 The blue green squares for the X across the blocks work just as I had hoped--and I'm looking forward to seeing more "trails" as I get the secondary blocks made.

These are the best pictures yet to show the lusciousness of the fabrics I'm using.

Much slower progress than I had hoped for.  But all this was accomplished with all sorts of interruptions, including, over the course of more than an hour, traveling over some back roads I'd never seen before--from which there appeared to be no outlet. (Country roads are a lot easier in the Midwest where they are set out in squares with no mountains to interrupt them!)

I'm hoping tomorrow will be a good day, but I know it will have its challenges.  My schedule has me teaching as many as four classes at once--I rather doubt that is possible.  Many essential materials disappeared while I was gone.  We have a new principal, and she wants to know which ones I need, but I'll have to get with someone at another school to determine that since I don't remember the names of all the books.  (The sad thing is that there were at least two sets there since the previous teacher had left a partial set and I'd left everything--because those things belong to the district, not the teachers.)  Sadly, I think I'm just in survival mode. It's next to impossible to be sure students are as productive as they need to be with so much missing.  And then there are the headaches and the nausea--so I just keep putting one foot in front of the other.

I'd meant to take pictures of some of the colorful trees in our community--but I left home without the camera.  This is one of the most colorful autumns we've had in years.  If the weather cooperates, there should also be some balloons airborne as I pass through Albuquerque tomorrow morning.  The trick, of course, is keeping ones eyes on the road and avoiding the misjudgements of drivers who watch the balloons more than the road.

I forgot I had this picture of Sweet Teen, taken right after her hair appointment last month.  Yes, she was happy. 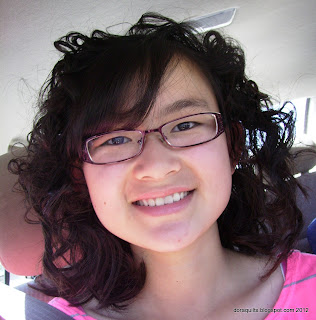 This is homecoming week in our community.  And homecoming during senior year is a pretty big deal. Lots of activities--including Friday night football, Saturday morning parade, Saturday night dance, several girls for a sleepover--and then we'll need to be at McCall's Pumpkin Patch to park cars Sunday morning.  (Proceeds to benefit her civics classes' fundraising for a trip to Washington, DC next spring.) I do hope I can get some more sewing time--and another blog post or two.

Linking to Judy's Design Wall  Monday and Connie's Free Motion by the River ).

Quilt Progress & Back to Work 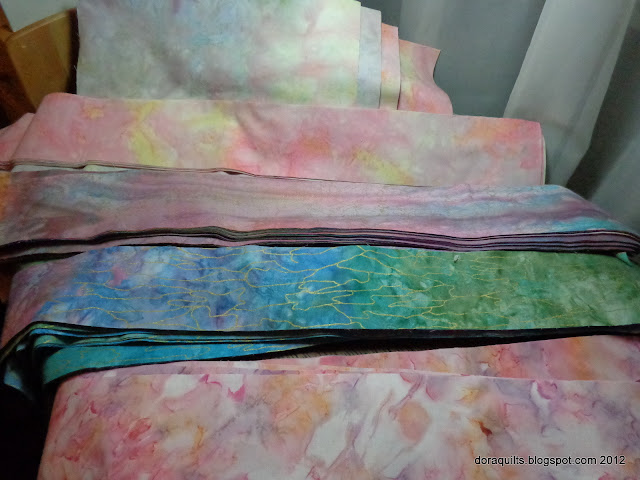 I managed to get these strips and squares cut over the weekend.  I'm hoping I counted correctly.
This is the best these fabrics have smiled for their photos yet.  Taken after dark in the light of an Ott lamp. No, it's not a design wall--just some stacks of fabrics.

I did get the plants watered before dark--but I may have some dyeing pansies.

Today was my first day back at work.  I had to deal with headaches and nausea all day, but I also had lots of hugs from students who were so glad to have me back.  They are still putting more students in my class.  Probably one of the best things that happened to day was that one of those new students told me how much he likes the class already.  Their schedules are a mess.  I'm supposed to be teaching reading, writing, and math at the same time several times each day.  The kingdom is ruled by the "Master Schedule" and with students in first, second, third, fourth, and fifth grade (I hear a sixth grader is coming), there is no doubt that the Master Schedule overpowers common sense and assuring that the programs are delivered with fidelity.  (Guess I should just chill since the teaching materials have disappeared.)

Anyway, I don't think I'll manage even 15 minutes of sewing today since I need to get the various conflicting schedules into one color-coded data base so I can find some solution to the scheduling issues. I'm hoping the job goes quickly because I also need a relaxing bath with a couple of cups of Epsom salts to see if that might help the awesome headache.

I'm going to link to some parties, because who knows how much time I'll have to blog now.  (It was almost 6 p.m. when I got home after having to stop to pick up a few groceries and a prescription. Tomorrow I'll probably have to drop by the neurologist's office because I still haven't received a copy of their release for records, and I need the records.)

For more quilting goodness from other bloggers, stop by to visit Judy at Patchwork Times and Connie at Free Motion by the River.

I'm thinking I'll probably start being late linking up with other blogs--sometimes too late to link up at all.  That won't break my heart--but I definitely will not be so happy about not reading and commenting so often! Also, I love the new-to-me blogs I discover through linky parties, so three hours or so each day commuting will definitely impose some unwelcome limits.