Not much accomplished in the way of quilting or knitting. 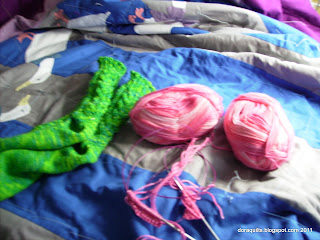 Finished the St. Patrick's Day socks one night this week, started some springy pink ones (which would be a lot farther along if I had spent less time looking at patterns), and am *still* in the process of stabilizing "Fowl Play."
Too bad I have to spend so many hours a day commuting to and from work--for that matter, it's too bad I have to spend so many hours working in order to have enough money to buy insurance and scrape by.  On the other hand, it's nice to know that I'm working at something that makes life better for kids and families.
Sunshine, lovely sunshine here, accompanied by spring winds, of course!
Oh, I'm linking up to Sara's blog, although I almost feel guilty for doing so.
Posted by Dora, the Quilter at 3:49 PM 4 comments 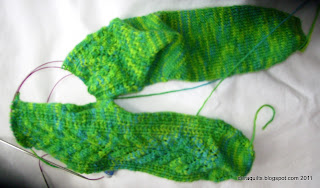 Back during the wicked weather of January and early February, I began these so I'd have something green and special to wear for St. Patrick's day.  I'm thinking it's likely that too much time was spent while I watched a few movies with my hands were pausing.  Anyway, they're not quite long enough, so I can't wear them today.  (I'm wearing a Kelly green knit top instead.)
And for my green activity, I'll be working on some quilts using one of my people-powered sewing machines (PPM).  That counts as green, right?

I thought I might have lunch at my outdoor table since we're supposed to have the warmest day we've had thus far this year.  But we also have high winds and regional fire danger, so I'll have to be content with eating inside, since I wouldn't want my lunch to blow to the next county! Here's our current wind/fire danger map, courtesy of www.weatherbug.com 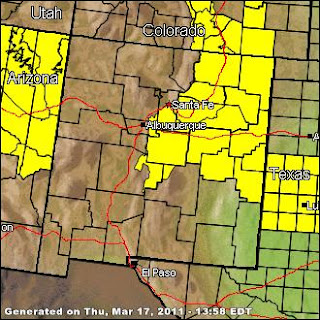 I'm taking comfort in the fact that it's still yellow and not red--which is what we'll see later this afternoon. 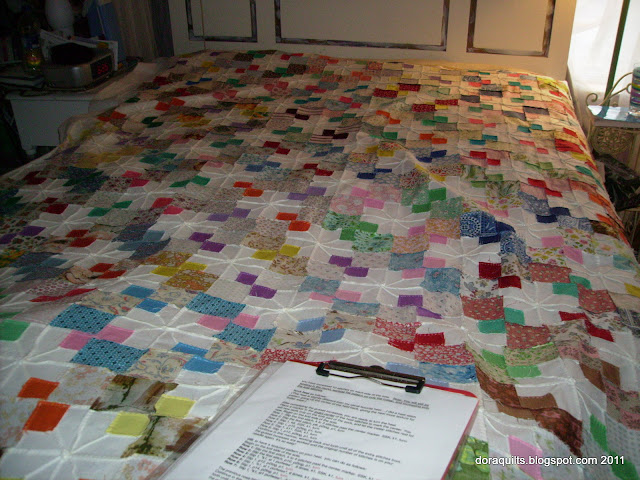 I spent literally hours pressing quilt tops and backs today.  Tomorrow I plan to layer and baste them for treadle quilting.
I thought I had a backing for the one shown, but I don't, so it won't be one of the ones that gets basted tomorrow.
This quilt top was made by my mom's aunt, Bessie Hyatt of Ozawkie and Dennison, Kansas,  It has a few pieces of fabric scraps from my clothing and that of my mom, and a couple of pieces from my sister's clothing scraps. I think I recognize fabric from a couple of shirts Mom made for my dad and brother.  Aunt Bess and Uncle Ralph had no children, but they did have five nephews and nine nieces.  Most of the nieces sewed their children's clothing and saved their fabric scraps for Aunt Bess. Of all of Aunt Bess's quilts and quilt tops, I think this has the fewest of our scraps.  The latest scraps I can identify are from when I was in upper elementary school. As far as I know, I'm the only grandchild who became a quiltmaker.
Aunt Bess refused to give me a quilt because I didn't get married. (Shame on me!)  One time when we were visiting her in Dennison in the mid 1980's, I begged her to at least let me have a quilt top. She finally brought out two or three, and I chose this one.  The irony is that once I had it home and looked it over, I realized it just wasn't worthy of weeks or months of hand quilting.  As I was growing up in Central Illinois, Aunt Bess was my inspiration to become a quiltmaker, something I dreamed about from the time I was two and a half.  By the time I realized that her skills were mediocre at best, I had made several quilts. Aunt Bess made quilts for 60 or 70 years, and her skills never improved.  Isn't that sad? I folded it and put it in a box, thinking it was unlikely ever to become a quilt.

Back in the 80's I repaired a quilt top in the French Bouquet pattern that she'd given Aunt Louise and added borders in a fabric that was the closest I could come to a reproduction fabric. 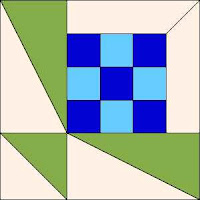 Instead of the nine-patch block, Aunt Bess had pieced tiny eight-pointed stars with one inch sides.  She probably got the pattern from the Kansas City Star, Capper's Weekly, or another farm paper.
She had given it to my Aunt Louise when she got married around 1945. After I repaired the fraying stars and added the borders, Aunt Louise eventually had it quilted by some ladies near Wichita.

However, memories of those endless hours of piecing to repair Aunt Louise's quilt failed to inspire me to take on my own quilt top from Aunt Bess.  I'd almost forgotten about that quilt until I pulled out the Tulip Top that I quilted for my niece. Then I realized that although it wasn't worthy of hand quilting, I could certainly machine quilt it.

Like many of Aunt Bess's quilts, this one had a plain white sheeting border.  The corners are blocks made from fabric in a green, white, and orange stripe that my mother made for me in sixth grade; I'm sure she thought it would help me not look so fat.  The interesting thing is that one of the corner blocks is pieced from three strips of that fabric.

At one time I thought I'd add a print border, but the top is so big already, that I'm not going to add another border.  I'll bind it in a 30's print, or several different prints.  However, it won't be one of the ones I layer tomorrow because I'm too tired after all those hours of ironing to search for fabrics and piece and prepare a batting.

I have the happy opportunity to have brunch with a dear friend (the recipient of the Soleil d'Hiver quilt) tomorrow, and then will go to the church to layer and baste the quilts.  For those who wondered, Mary was surprised and thrilled with the quilt.....
Posted by Dora, the Quilter at 7:37 PM 1 comments 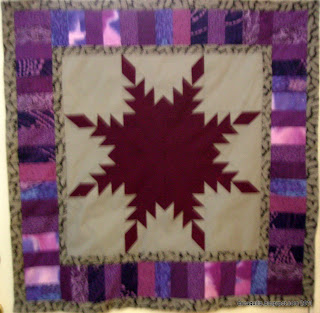 Hand pieced feathered star--each piece traced around a piece of template plastic--over 20 years old.  What to put with it?  It's so old that I don't have red-purply fabrics to put with it.  My sister-in-law said one of my nephews who has dealt with some pretty serious health issues since he was a toddler would love a prayer quilt in purple, gray, and white.  I've been trying to come up with one for over a year.  Of course, the additional challenge is that I didn't want to fill it with lots of "flowerdy" prints (Southern expression).  I finally just rounded up a bunch of violet/purple fabrics knowing I would have to follow the plan that enough variety in fabrics can make any combination work.  So, I reached this point last weekend, but too late to post for Sara's Whoop!  Whoop! celebration--I'll link up this week.
And then I'll go work on the next step.
My hope is that over the next week I'll get several quilts layered for quilting.
Our one week "spring break" got off to a delayed start when I realized I'd left some papers I'd need inside my classroom.  Went back to get them and as soon as I'd closed the car door, I realized I had my school keys in my hand but had locked the car keys in the car!  Thanks to help from another teacher and a fairly local locksmith, my departure was delayed by only a little less than an hour.  It's been eight years since my keys have been locked in my car--by a seven year old daughter who endured years of my saying, "Keep the keys in your hand or your pocket."  She's not-so-secretly thrilled that she feels entitled to spend the next few years saying the same thing to me!  The one bright spot, aside from how quickly the locksmith arrived, is that it cost a few dollars less than it did eight years ago.  Still cost a hunk of money, however.
My plan was to put all thoughts of school behind me for a few days, but I barely slept last night for thinking about it!  I mustn't let it mar my few days away.
The signs of spring apparent where I live are high winds and fire danger.  I'm hoping that over the next week we'll also see some signs of spring flowers emerging.  Those always brighten my outlook!
Posted by Dora, the Quilter at 9:11 AM 2 comments