The amount of quiltmaking I've managed over the last six months is absolutely mind-blowing--in its absence, not because I've accomplished much.

This critter languished for months before I got her bias binding attached: 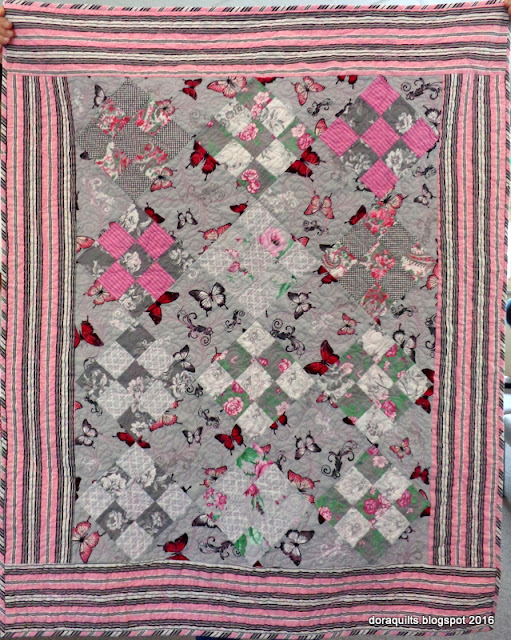 The straight borders were warped in the holding and by the camera.  They are straight in real life!
This was made from a fabric pack I picked up somewhere.  I added the border and setting fabrics. 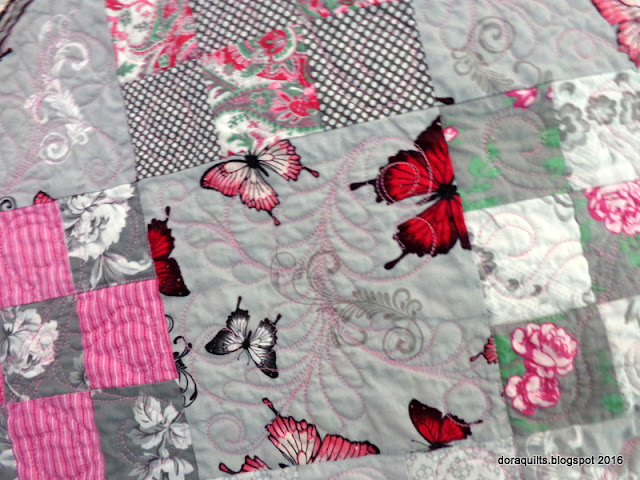 We made these nine-patches at a Victory Prayer Quilt Sewing morning many months ago.

It afforded the opportunity to play with some freshly designed quilting motifs. 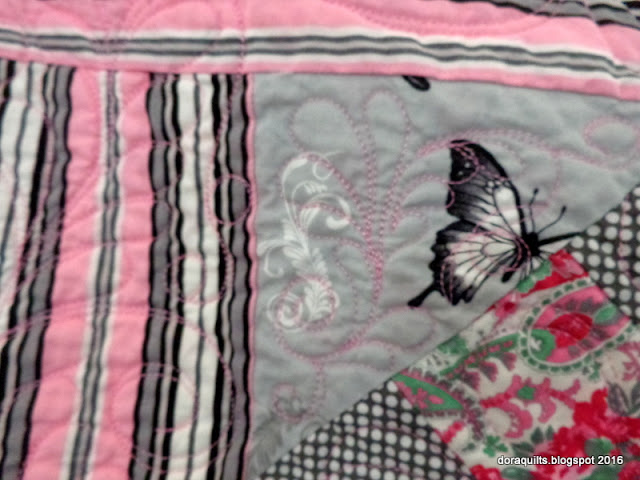 Between my job and my vision, my energy just wafted away over the last several months.  Of course, I had no idea that my cataracts were siphoning so much energy.  A lot of that energy is now going into putting glasses on and taking them off, switching to a different pair, trying to remember where I last placed them; you get the idea, I'm sure. I ordered a new pair of progressive lenses this week, and I'm hoping their arrival will be like adding some very nice magic to my life!

I've been trying to snatch minutes to piece and quilt and have been almost notoriously unsuccessful.
Last night I worked on these: 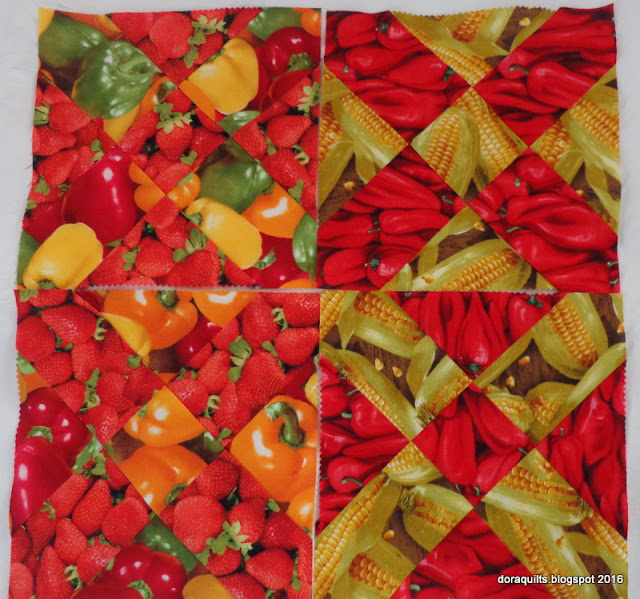 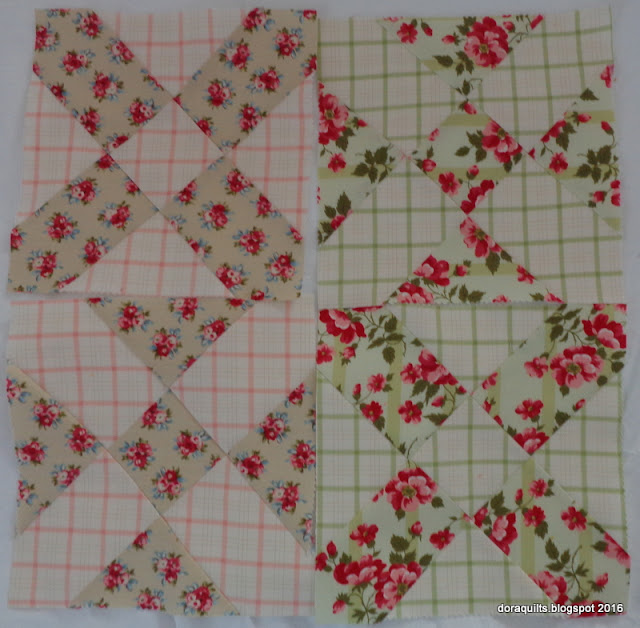 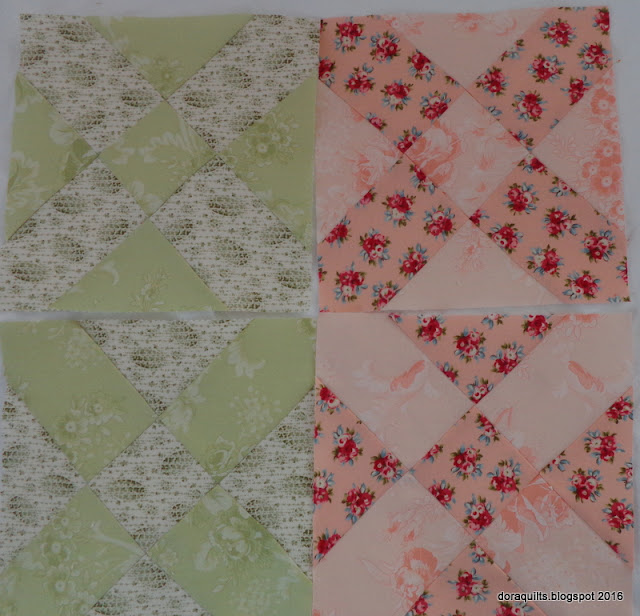 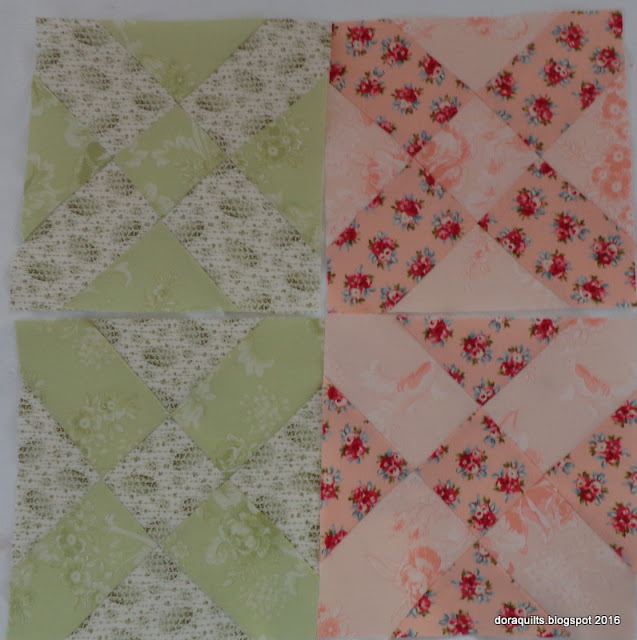 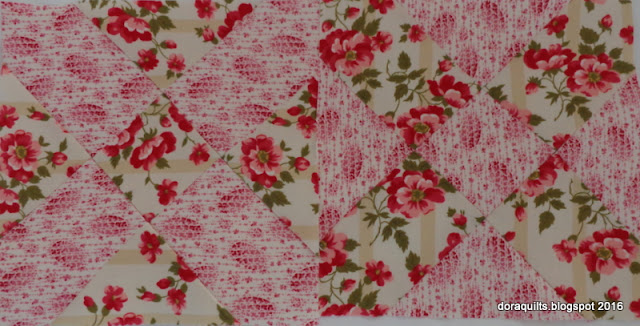 I started these at last Saturday's Victory Prayer Quilts sewing morning, and tried to grab a few minutes during the week in the evening to work on them.  However, since I really lacked energy, most of the sewing was done last night.

These are pieced from 10" squares with a quick cutting method that produces a negative and positive block if there is a lot of contrast in the fabrics.

The fruit and veggie fabrics are from a Riley Blake line, if I remember, and were inspired because for years the College Girl has been telling me to make some food-themed prayer quilts for guys "because guys always like food" and because I seldom get inspired by "guy fabrics."

The floral blocks are leftovers from some other prayer quilts and a layer cake that was a big disappointment because I'd ordered it expecting purer colors.  With rare exceptions, peachy pinks are not appealing to me (or on me).  I realized a few months ago that in addition to my being allergic to most orange flowers, my parents often dressed me in orange tones, which were the opposite of flattering with my skin tones.  Seems somewhat comical now.

We've had a bit of snowmelt since our storms, but probably more evaporation.  There's a crust over the top of the snow, which means it's slowly being absorbed by the earth, and that's a good thing.

With the big snow storms hitting the East this week, I hope all the quilters have plenty of fabric, thread, and, if they lose power, a working treadle machine and a source of supplemental light.

I linked to a Friday night Sew-In earlier this week, then updated my computer (which took hours and hours over the course of a couple of days), and resulted in the link being lost.  So if you've come here from that site, please leave me a comment so I can post the link.