Here are a few more quilts from our last prayer quilt blessing. 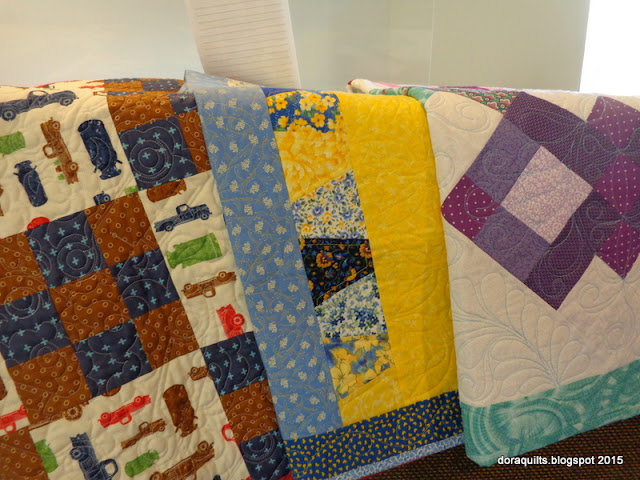 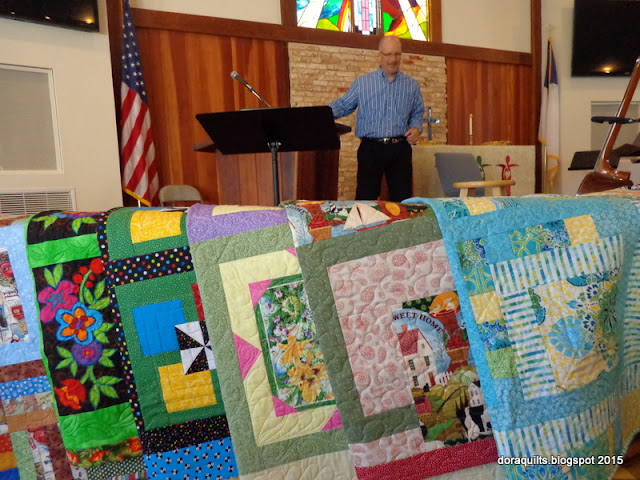 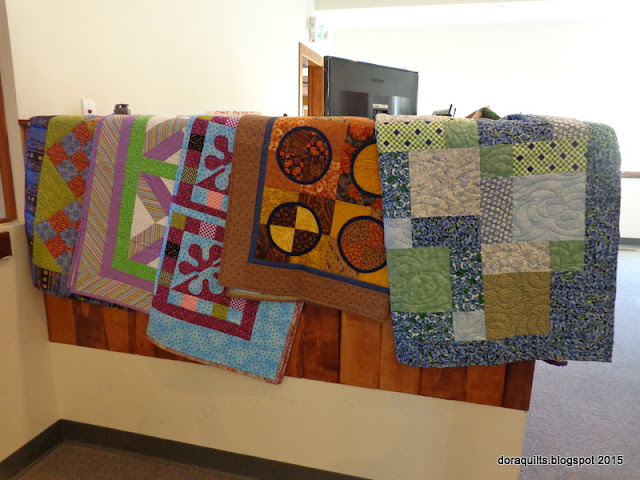 And, just for fun, here's a photo of the class float from my trip to El Paso, IL last week. 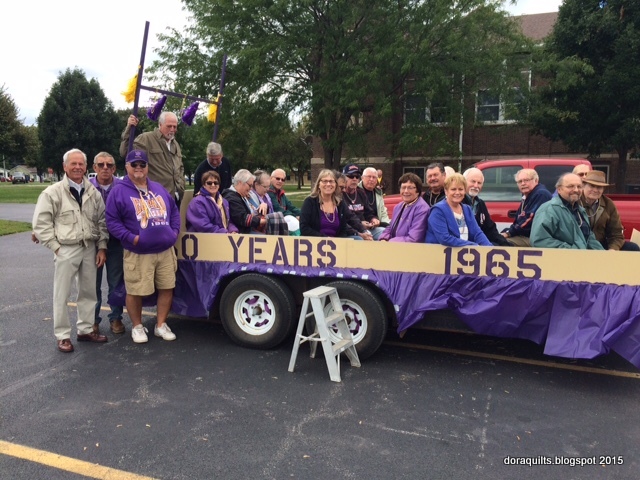 The float ride was an unexpected bonus. (Yes, that's our school in the background.  It has now been consolidated with that of the community of Gridley, seven or eight miles to the east.) Being 87th in the parade lineup gave us a great deal of time for informal catching up.  It was a wonderful prelude to the evening meal.  And, yes, there were a lot more guys than gals.  Of the 58 graduates, only 17 were women.  Our class was very, very lucky that we did not lose a single person in Vietnam.

I was able to talk with several people I'd not seen since graduation, and we missed a few who did not attend.  However, we've all faced challenges and grown and moved on, and everyone seems to be in a pretty good place emotionally.

To sum up the weekend in words we heard frequently as kids, it was more fun than a barrel of monkeys!

Here are a few quilts that were blessed in August. 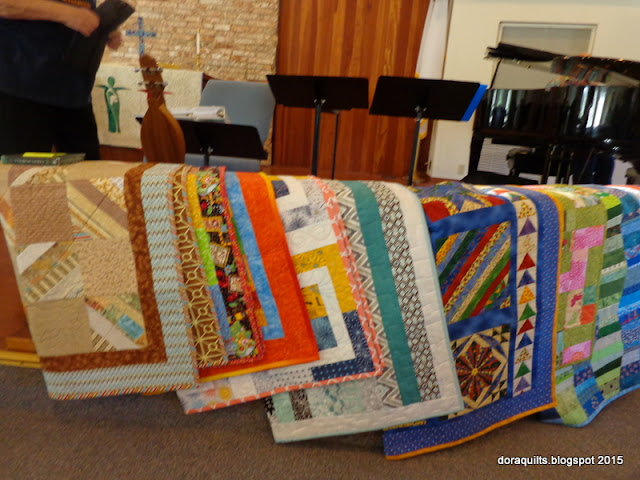 We dedicated over 60 quilts, and they were layered so tightly that many are barely visible. They are so petty. 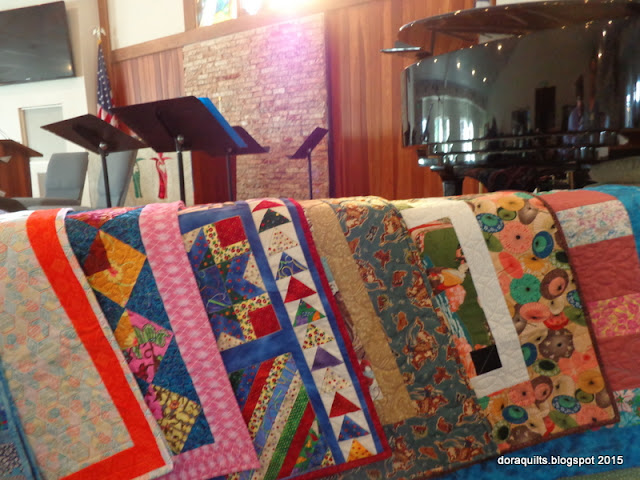 However, they are rapidly departing for new homes, although we had hoped we would have enough to last until after the first of the year.  For much of the summer I quilted so many that I lost count and didn't even get photos of all of them.

Since July I've had absolutely no time to quilt anything; I hope to change that this coming weekend, although our community is having the Pinto Bean Festival.

However, in the last week I've given one to my classmate Bob K., who is having back surgery; today I sent off three: one to Polly B. in Florida, wife of a classmate, who is in need of a diagnosis; one to Leah T. in Illinois who needs a diagnosis for heart issues and is hoping treatment will be non-invasive, and one to Robert J. in Illinois who has been suffering for six years with prostate cancer that is spreading. (Robert's wife is a former schoolmate.)

When we started our prayer quilt ministry, besides using our stash, our hope was that we would be able to make some small quilts that would prove a blessing to people with cancer.  We've expanded the ministry to include people facing serious health challenges.  While we frequently hear wonderful stories of healing and God's grace, I am constantly amazed at how much I am blessed by this work.  I hadn't even considered that possibility back when we started, and all the blessings just make my heart sing!

The New Mexico State Fair is in full swing in Albuquerque.  A couple of weekends ago, my engineer was engineering pie crusts, for pies that are being sold piece by piece at the Asbury Pie Cafe at the fairgrounds. 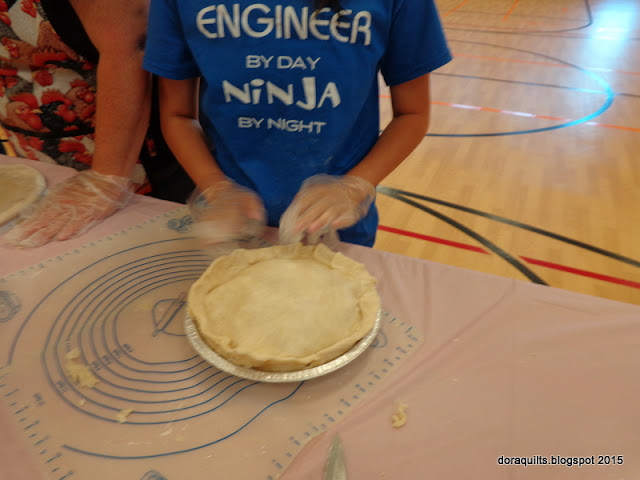 She was part of a large crew working in Wagner Hall at our church. 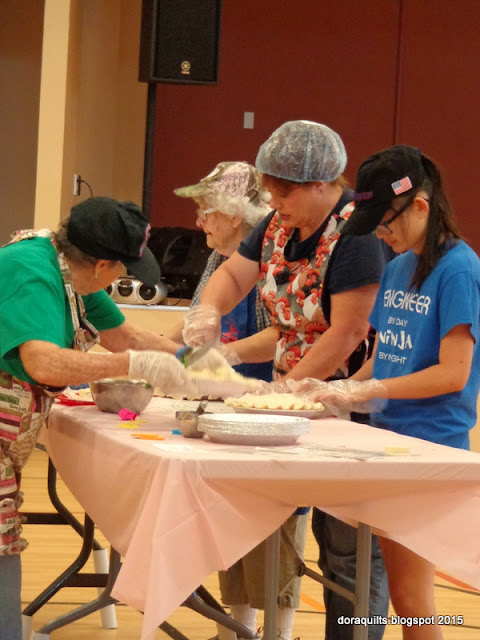 This past weekend I made a very quick trip to my first hometown, leaving Friday afternoon and returning near midnight last night.
My friend Pat and I made a trip out to the farm between El Paso and Gridley, IL where I grew up, because my baby sister in Houston requested photos; I'm glad we were able to do that, although it's sad that every time I return, there is less to see. 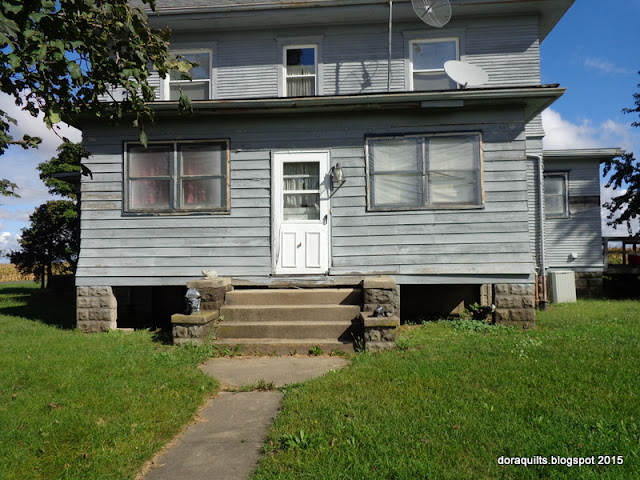 This is the south face of the home.  The porch was enclosed in the late 50s or early 60s.  There used to be white wooden lattice panels over the spaces open between the foundation pillars of the porch.  It really looks as if the sidewalks are still the original ones installed around 1918.  I wonder if any new cement would last a hundred years. 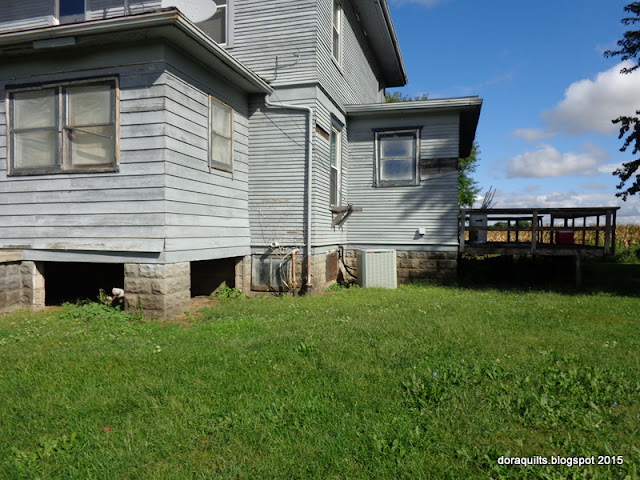 I'm not sure why the wooden lapped siding of the house is missing in places.  It could be the result of tornado damage. 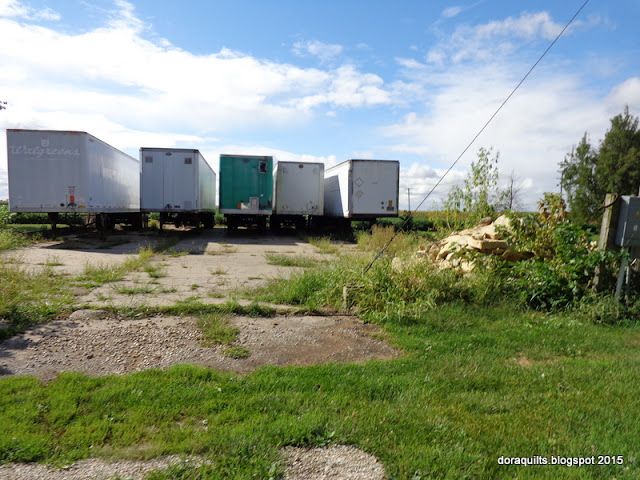 These semi-trailers are sitting on the 60'x100' foundation of the laminated rafter building that my father had built with an inheritance my mother received in the late 1950s.  I find it amazing that husbands could do things like that.  The building was hit by several tornadoes over the last 25 years or so, and it was torn down.  The cement pile to the right consists of remnants of the poured concrete foundation for the rafters. There used to be a huge orchard to the right. 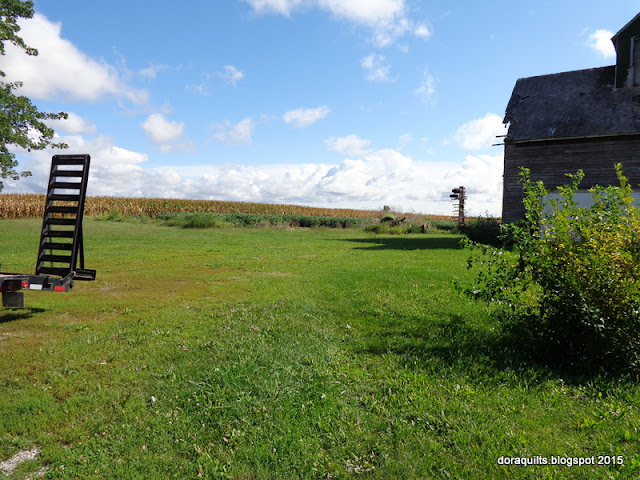 This view is toward what was the site of the barn, also a victim of several tornadoes. 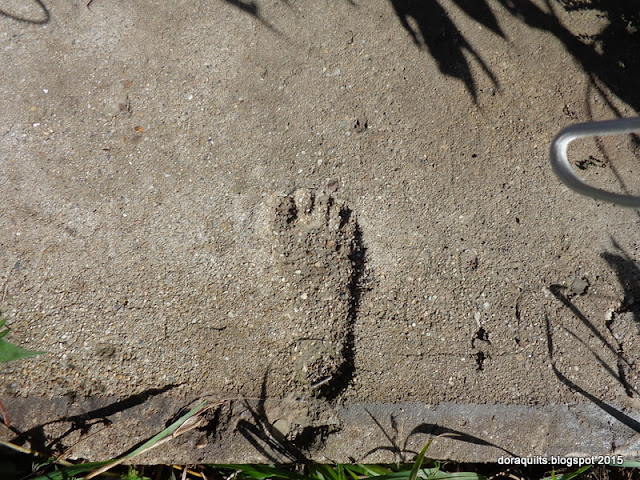 When I was a small child, a concrete foundation was poured at the west side of the corn crib for a wire-walled "room" to store corn on the cob.  I'd looked for this footprint on previous visits and had come to the conclusion that it had been worn away, so I was glad to find it this time.  My parents and grandfather were so happy about creating this foot print; to me the wet concrete on my foot was totally disgusting!!! 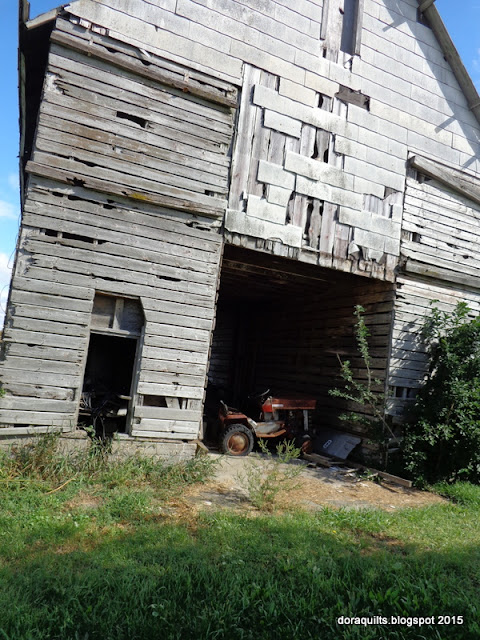 This is the south face of the crib.  Although we always called this the "corn crib," we used it for storage of both corn and oats. Yes, more evidence of tornado damage here. 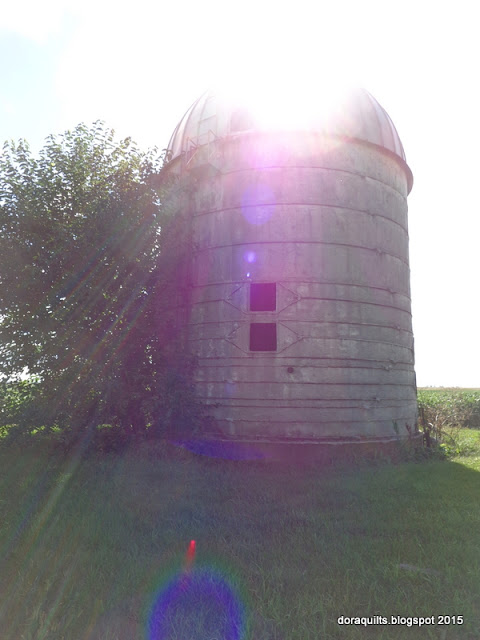 I knew the sun was not in a good place, but I could not resist taking a photo of our grain silo.  (At least this was not built with my mom's inheritance.) 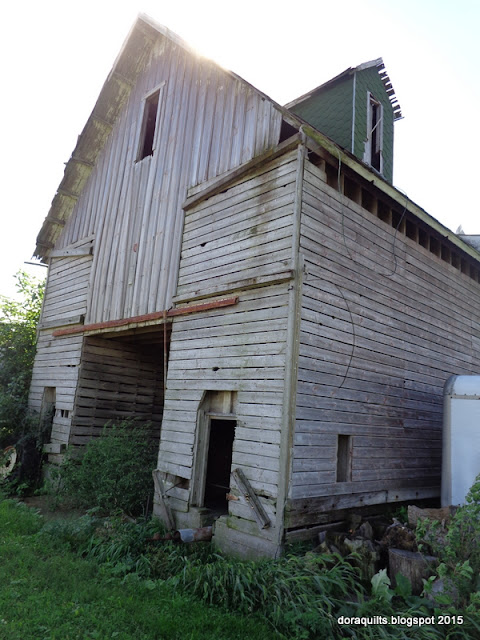 This is the northwest corner of the crib. Through all the decades and many changes of paint, the green shingles on the cupola remain. 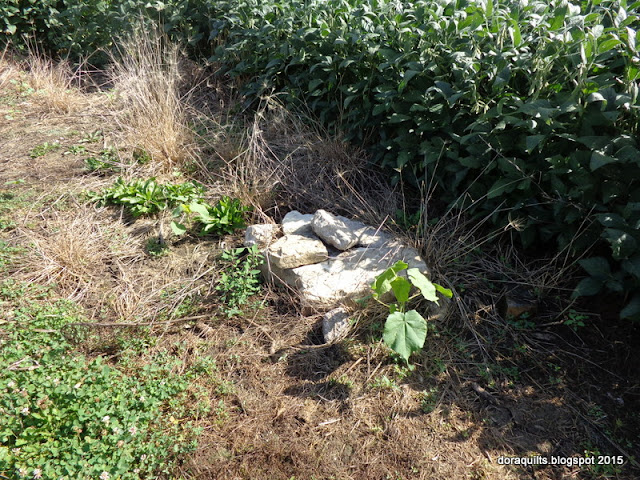 This little concrete "monument" is what remains of the large concrete trough that watered cattle and horses.  It was also where the gold fish from my early childhood lived after I lost interest in them.  By the time I left for college, they had grown so much that they could have been sold to people who collected carp, but back then I didn't even know people had such hobbies. Although an underwater coal fueled heater kept the water from freezing in the winter, one winter after my mom, sister, and I had moved out, my dad let it freeze over, killing all the fish. (I'm guessing the concrete surrounds the water pipe that delivered water to the tank.) 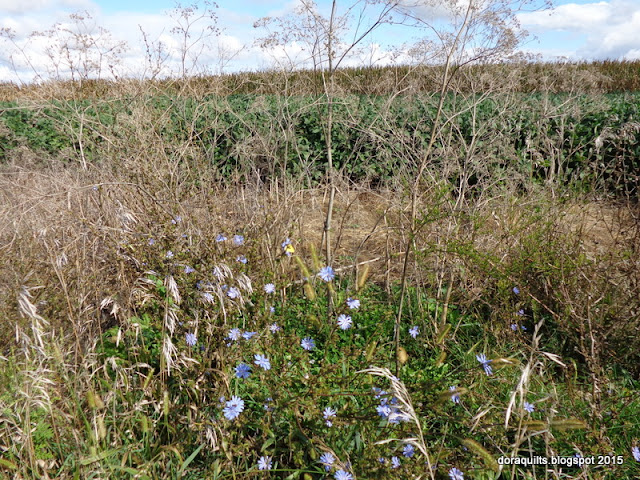 Here's a view to the north on the side of the barn yard that besides the barn was home to a movable storage shed, a hen house, and a brooder house.  When the storage shed was being built, my parents told me Grandpa was going to live in it, and I just cried and cried.  They thought the whole thing was funny, but their joke was never funny to me! 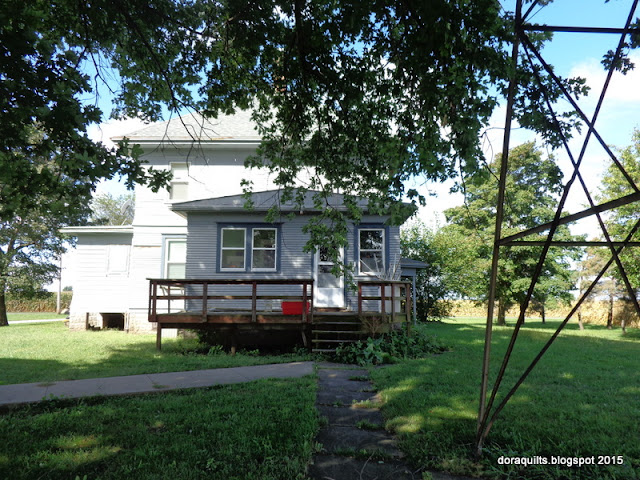 This is the east face of the house.  The two windows to the east mark the position of the "pantry" with a dumb waiter to the dining room, a long porcelain sink with an equally long drainboard, storage drawers and windowed china cupboard, and a storage closet.  The door and window on the right mark what we called the "back porch" and was a weather protector where we dropped our boots before entering the kitchen.  The deck has been built on since the place was sold.  The iron rods to the right are the base of the windmill.  And here are more of those nearly 100 year old sidewalks. 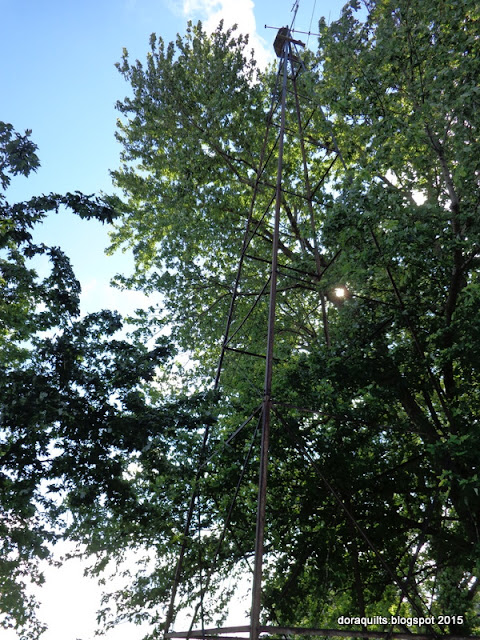 The top of the windmill has been replaced with a television antenna. 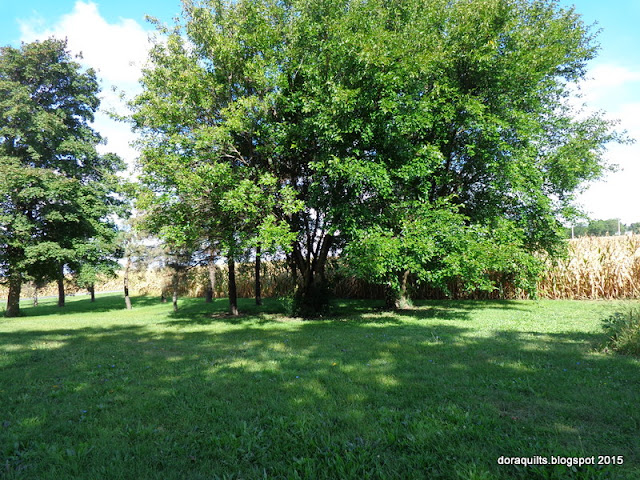 The yard to the north of the house no longer includes our huge garden because that space has been reclaimed for the corn field. 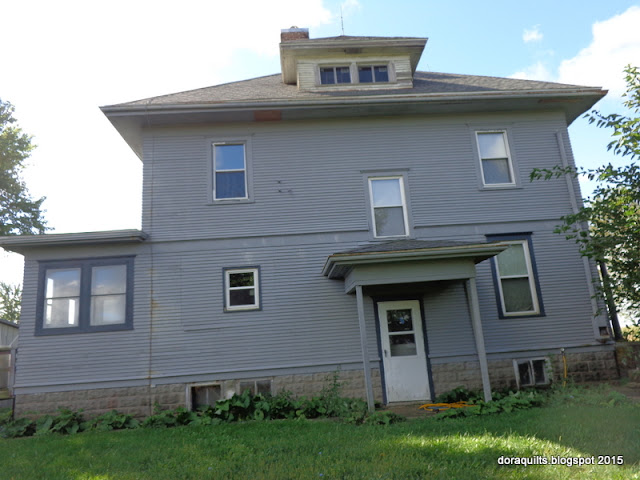 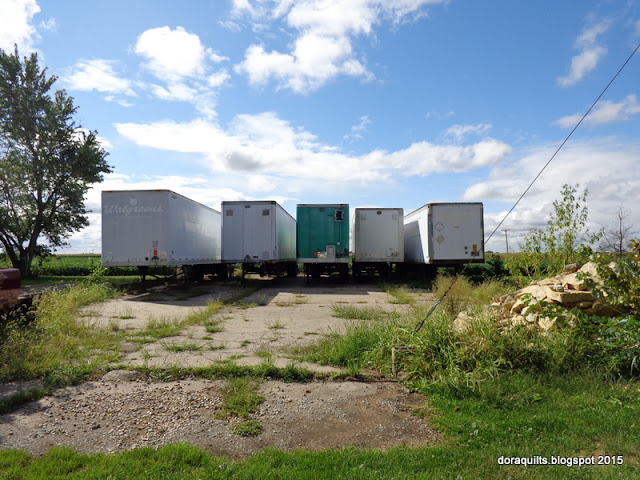 This second photo of the large foundation, shows how blue the sky was, rivaling New Mexico's sky.  No flat bottomed clouds in Central Illinois!

This little photo session was the beginning of a weekend of immense fun that included people I hadn't seen for years, including several I hadn't seen in decades--since we graduated from high school!