I escaped from my workplace early so I could see Sweet Teen in the homecoming parade.

I was misinformed about the parade route--so was part of the police force, for that matter.
Missed the parade.  Missed my daughter on her float.  (Of course, the high school can post all kinds of [un]important messages to our phones and their website.  But they are incapable of posting the parade route. And a call to the city offices yielded more misinformation.)  Wonder how many other parents missed it.  I do know of at least one auntie who missed it. We had a lovely chat about the community while we were waiting for the parade.
However, here are some pictures from one of our city parks.  I love these sculptures that reflect our community's history. 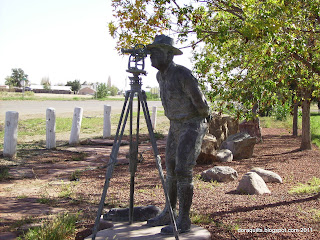 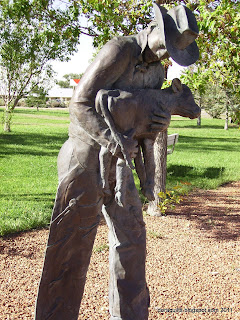 And I love this gazebo in the same park. 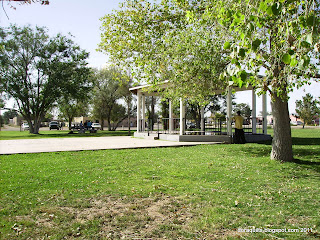 Makes me remember all the summer band concerts in all the town parks in the part of the country where I grew up.  Sadly, I don't think they ever have band concerts in this park.  I love the gazebo and all the reminiscences it inspires, just the same.

And I have to admit that the very best parade I ever saw anywhere took place in the Midwest decades ago when I saw a 10 or 12 year old boy marching down a street with his snare drum and most of the neighborhood kids marching along behind!
Posted by Dora, the Quilter at 4:55 PM 0 comments 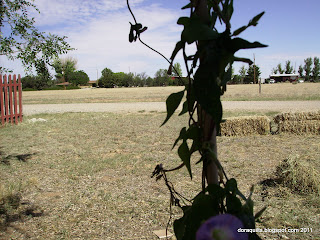 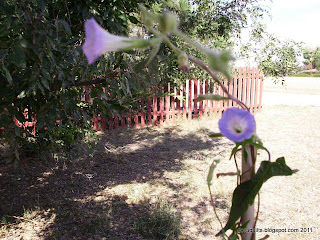 Struggling morning glories--actually, struggling as of two weeks ago.  The ones in the pot now have yellow foliage, despite several rain showers and good drainage. 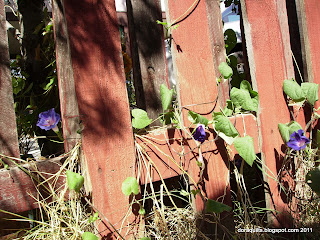 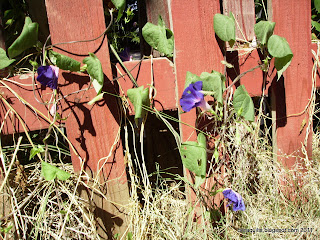 The ones along the fence are fading too.  Hopefully, I'll be able to capture some seeds for next year. 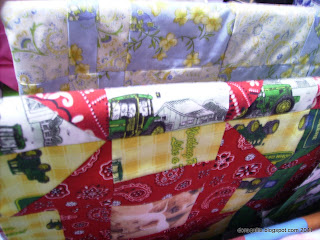 These quilt tops and pieces have neither changed nor moved in probably three or four weeks.  John Deere theme is for my nephew's son. I thought the blue and yellow would be for his daughter, but I'm changing my mind. 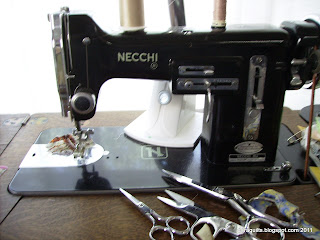 This is the machine that has been doing the majority of my piecing and quilting for the last couple of months.  Since it's in my living room in front of the north-facing windows, it's in a good spot for sewing--except when the afternoon sun has made the room too warm; then I've reverted to the 1936 treadle in the real sewing room. Of course, I've been doing very little quiltmaking--that's what happens when the daily commute consists of three hours of rush hour traffic! 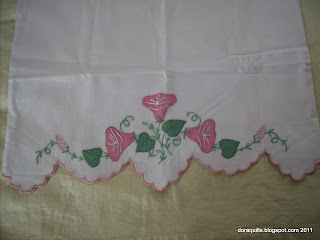 Non sequitur: Antique orphaned pillowcase picked up at Angela's Attic.  It's from around 1910, although who can say when it was appliqued and embroidered?  I always wonder if something unfortunate happened to the other one or if the needle worker just never managed to finish it. 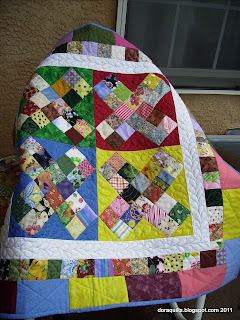 One of my sweet little students is struggling with seizures; we've had to call the ambulance three times in the last couple of weeks, most recently yesterday.  The drugs she's being prescribed just aren't controlling them, and she's had several hospital stays, so I picked up this prayer quilt this morning. 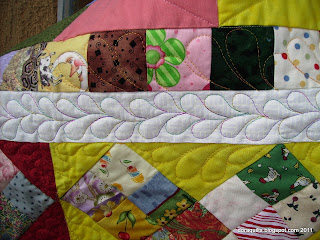 I couldn't find any that I had made in the cabinet of blessed quilts at church, so I brought this one home and added some quilting so it would be a bit more interesting and because I needed some prayer time for her. 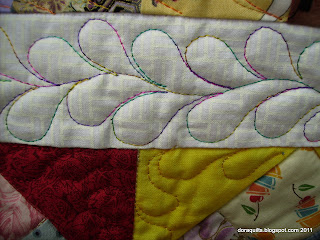 I used Glide thread in the edges of the center blocks, a multicolored Superior Threads Rainbows Thread in the white border, and a variegated gold Rainbows Thread in the next border.
It's hard to see anyone sick, but it's even harder when it's a sweet child.
I did quilt a lovely, cheerful log cabin prayer quilt--because my lovely friend who pieced it was intimidated by all the white.  I had a grand time quilting it--lots of variegated threads, lots of feather quilting--but I forgot to take a picture of it.
I hope my lovely friends are getting more quilting done than I am! I do love both quilting and blogging (along with dozens of other things) and really hope I can manage to post more regularly.  (Oh, the other thing that's taking so much of my time is creating learning materials for students for whom my school district provides none.  There are times I wish creating learning materials were my job!)
Happy quiltmaking......
Posted by Dora, the Quilter at 5:57 PM 5 comments 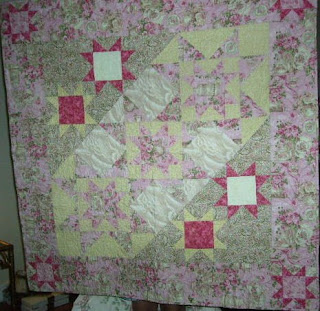 This is a quilt I made several years ago for my dear friend Harriet. I worked too slowly; her birthday was fast approaching; I finished it, packaged it up, mailed it to her. Then I realized I'd never taken any pictures of it!

We were able to have a truly wonderful, albeit short, visit with her while we were back east. Sweet Teen held the quilt and I took pictures. Harriet would not let us take her picture--she thinks she's aged--I thinks she's aged maybe five or ten years in the last 20+! So, no pictures of Miss Harriet, but here are some details of her quilt.

Although I still like many of the threads I used, I hope I've learned to choose threads that show up a little better, since I love the quilting and think it's sad when the only way to see the quilting is to check the back of the quiltQ 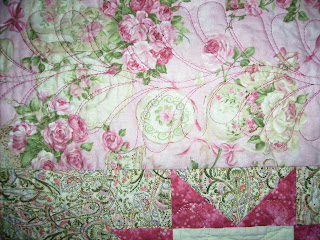 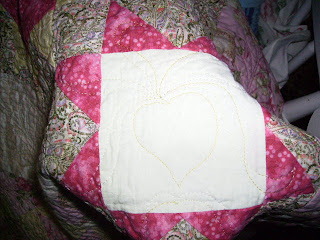 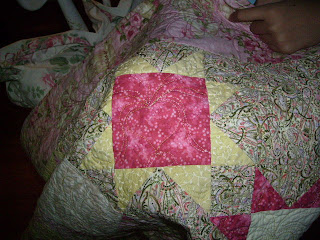 If you'd like to see greater detail, right click on the photos and open them in a new tab or a new window.
Alex exclaimed, "Oh, you quilted cute hearts on this quilt!" I'd forgotten. Wonder when I'll learn to always, always, always take many more pictures than I think I'll ever want?

Dora, the quilter
Posted by Dora, the Quilter at 2:00 AM 5 comments