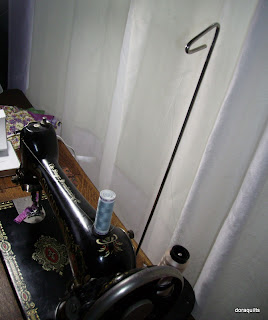 I do have a thread stand--it's often on a different sewing machine from the one I want to use for a particular task.  So today I'm going to share some hints and ways I use the cones.  I'm very grateful to other sewers and quilters who have shared little hints that have made it easier to use.

The first photo shows the cone stand behind my treadle, the thread coming up to the top of the stand, back down to the sewing machine and under the spool of thread, then on through the normal thread path.

When I was sewing fast, I used to have problems with the thread jumping off the top of the holder and then breaking.  A couple of other sewers shared their solutions to that problem, so I'll pass on what I have found works for me. Because the Fil-Tec Bobbin Line thread I was using here is so fine that it's barely visible, I used some yarn to show the path a bit better. 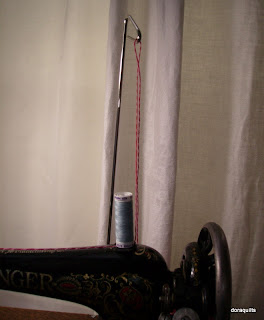 When I bring the thread up to the top of the cone holder, I twist it once so that as it moves the twist helps keep it on the ""hook of the holder. Then I bring it down to the spool holder on the machine, bring it to the front of the spool holder, and set a spool on top of it.  Because the Bobbin Line (and Superior's Bottom Line) thread are so fine, this spool of Mettler cotton works fine.

When I first began machine quilting, I often used Sulky Rayon thread.  I've always loved variegated thread, and they had one of the few that were widely available.  Because of the way the spool is wound, the thread needs to come off the end of the spool, so using the machine's spool pin caused some problems.  At that time I sat the thread in a skinny, empty olive jar on the back of my sewing table.  That worked well for those skinny spools of threads.  When I began using the large cones of thread, I preferred the cone stand.  However, when I was piecing and quilting, the cone stand seemed to always be in the machine I was using for piecing.  Below is a photo of what I now do with the machine where I quilt. 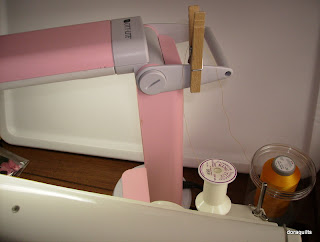 The cone of thread sits in a somewhat larger plastic jar on the back of my machine table, comes up through the top of the clothespin on top of the handle of my Ott lamp, forward to the spool pin, under a heavier spool, and continues along the normal thread path.  Here I just used an empty King Tut spool, but an older wooden spool of about the same size would have worked as well.

At the base of the spool pin to the right of the empty spool, you may be able to see a closed safety pin.  I used to use the hole created by the twist at the bottom of the safety pin as a loop for the thread (and that's why it's still there), but I think just running the thread beneath the heavier spool works even better.

Thank you for the "clothes pin" idea. It works great!