I've loved Bow Tie Block quilts since I was a tiny child.  In fact, in the 80's and early 90's I made quite a few.  There are so many different ways to set them and, thus, dozens of different quilts that can be made using them.  Because in those days my only computer was at work and because we had barely begun to think of things like personal digital cameras, I have no photos to post of those early quilts.  However, at the end of this post I'll share some of those early blocks that were template-cut and hand-pieced.

These instructions are for a "modern" version that can be rotary cut. These blocks are fast to cut and piece and are just as delightful in batiks and other fabrics with more modern designs.  We are so fortunate to have the countless lines of fabric from more manufacturers than we ever dreamed of decades ago.

For the purposes of this tutorial, the photos that accompany each step are shown below the text for that step.

For demonstration purposes, we'll make a six-inch block.  I've made quilts with every size block from three inches to nine inches.
Remember that you can right-click on any photo in the blog and open it in a new tab or new window to see the photo in a larger size and more detail.

If you are making blocks for the Treadle On Bow Tie Block Exchange, you will be following these directions to make the blocks (6-inch in finished quilt, 6.5 inches when you send them to the hostess).

For one block, select two contrasting fabrics, one for background, one for the bow tie. 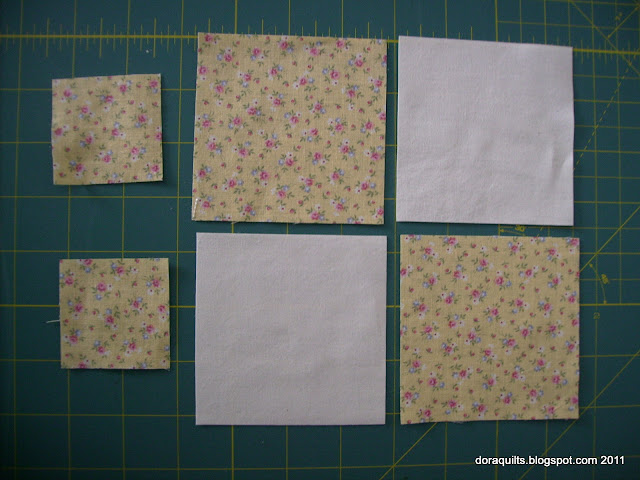 Mark a diagonal line across the back of the 2-inch squares. 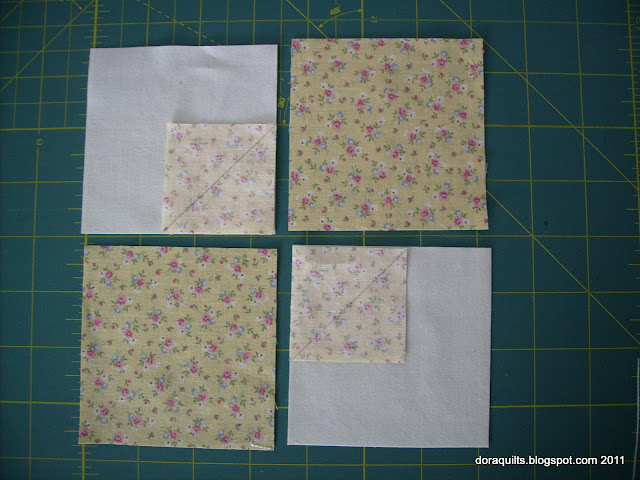 Align each small square with a corner of a background square. 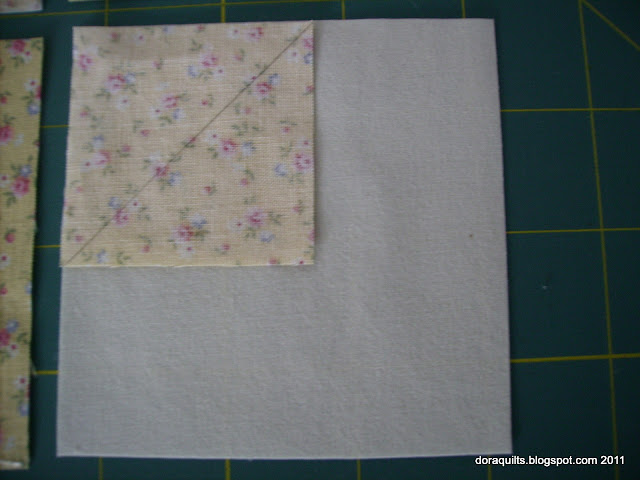 Stitch on the diagonal line.  Because we aim for accuracy, it helps to stitch on the edge of the drawn line closest to the needle or outer corner of the small square.  This gives us the well-known "scant 1/4-inch seam allowance" that aids in our accuracy since thread and stitches do take up a miniscule amount of space in the block.

Press the seams  to set the seams and make the next step more accurate. 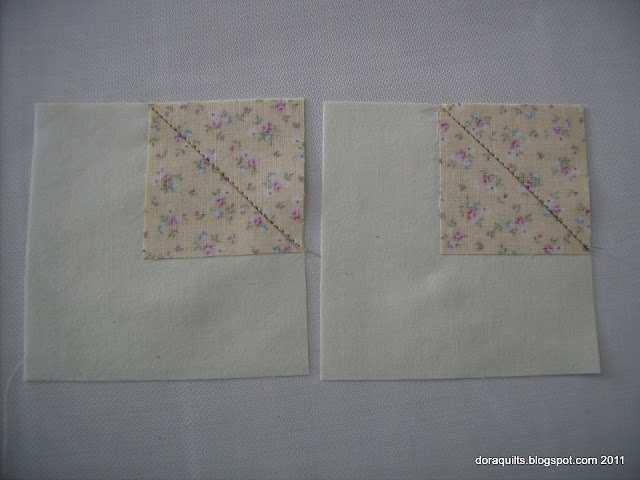 Then bring the inner corner of the small square toward the outer corner and press so it is right side up. We know our seam was accurate if the cut edges of all three layers of fabric align at this point.

If you are participating in the TOBE Bow Tie exchange headed by Cheryl Pinkerton due 9/3/13, at this point you will need to trim off the two bottom layers under the print, leaving a 1/4-inch seam allowance.  Then press these little blocks again. 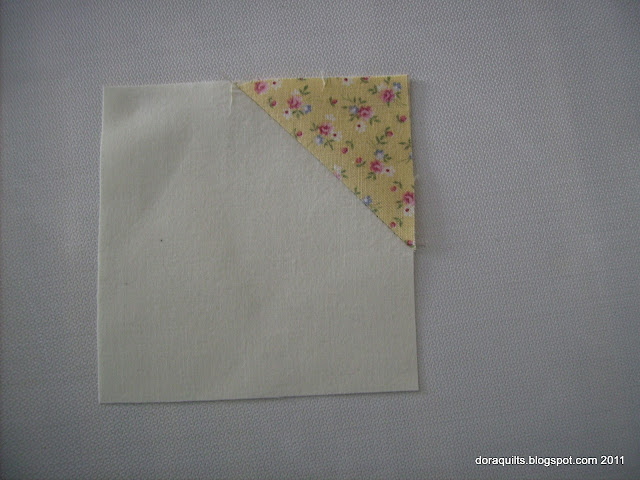 Lay each pieced patch on your table so that the new triangle is at the upper right corner.  Lay the print square above it. 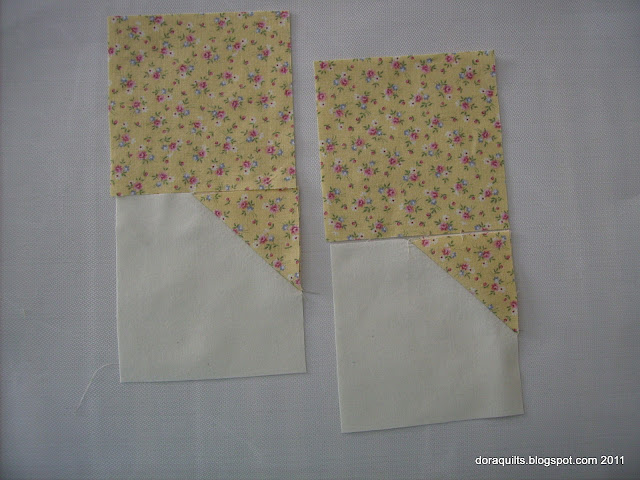 Fold the pieced squares up, aligning them with the print patches. 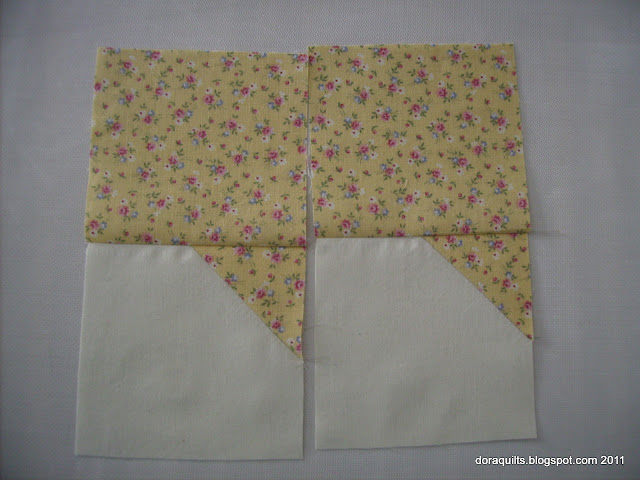 Lay the half blocks on the table aligning them as they will look in the completed block. 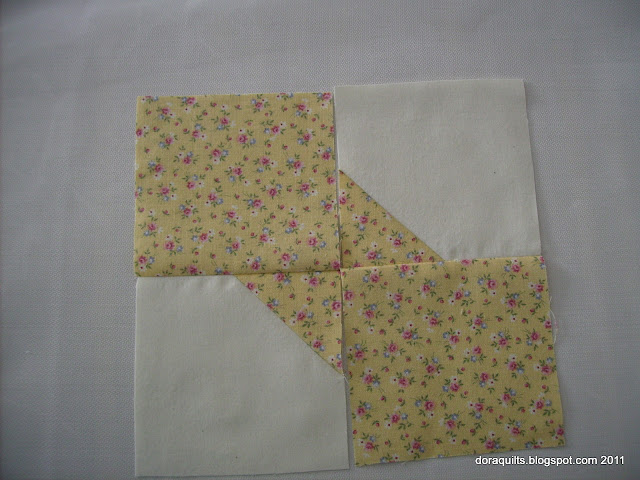 Align the seams of each half-block so that they butt up against each other.  This helps us achieve a perfect match when they are seamed together. 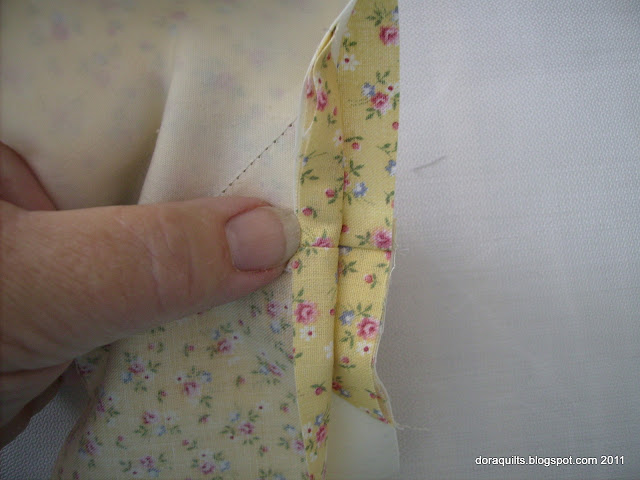 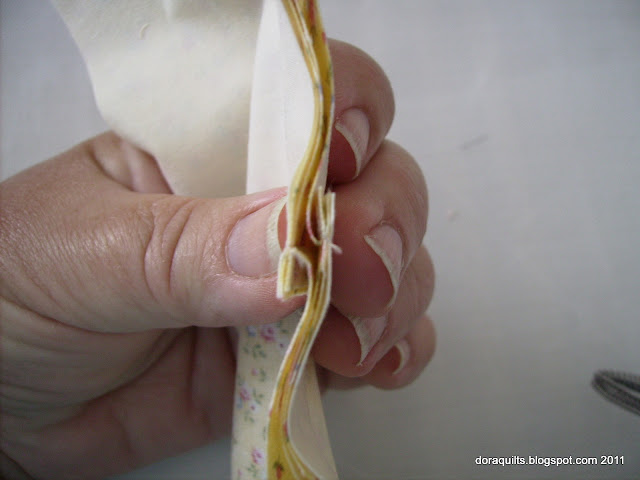 Sew them together and press to set to set the seam. 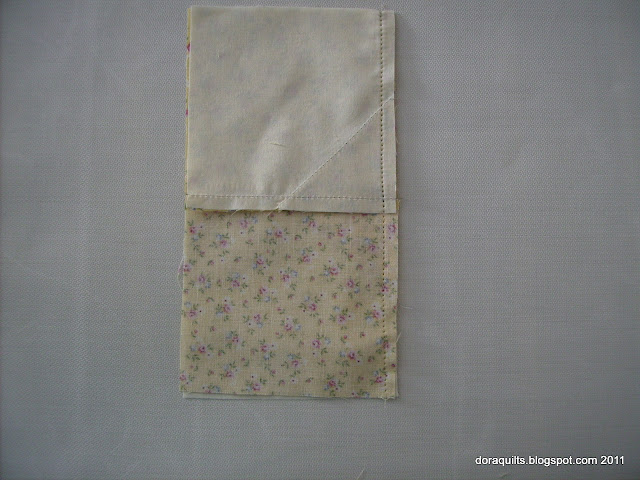 Before pressing the seam open, I clip the seam allowance with very sharp small scissors right where those two seams come together. Then when I press the block, I can turn the seams toward the print. 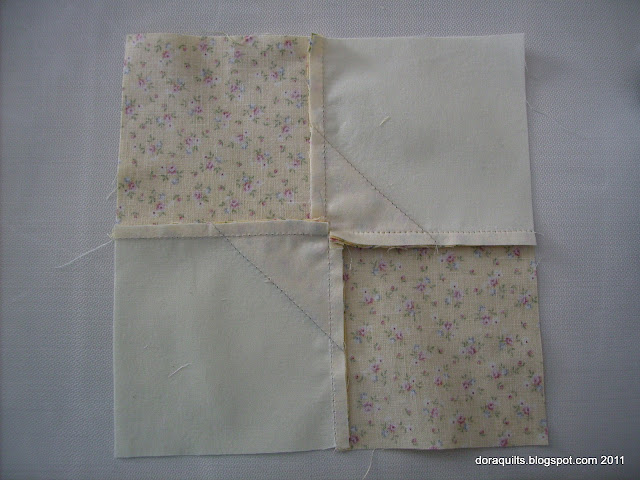 All the extra care we took at each step, helps us have well-aligned seam junctions in the completed block. 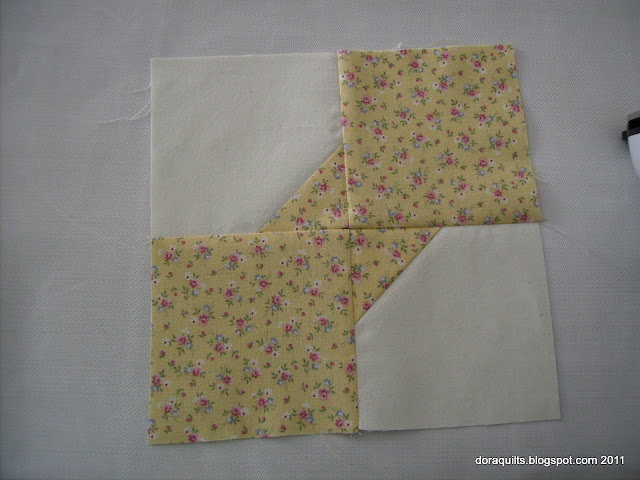 Traditional Pieced Bow Tie Blocks from Past Decades
The traditional way to piece these blocks was with four uneven trapezoids and a small square to represent the knot. 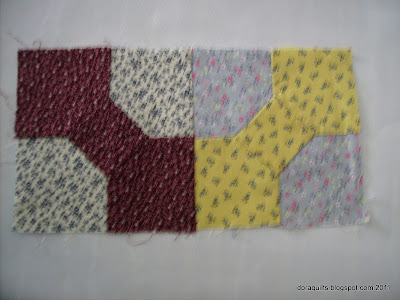 Because these pieces resulted in set-in corners, it was almost always easier to hand-piece these blocks. However, if the blocks were much larger, I did machine stitch them, just being careful not to stitch into the seam allowances. 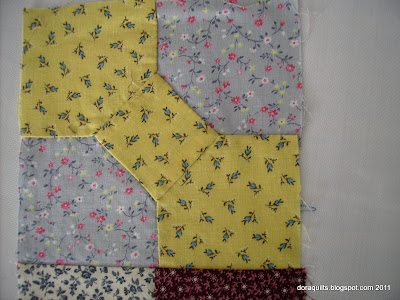 For that traditional method, I pieced a bow to opposite sides of the square, being certain to start and stop my stitching at the seam allowances.  Then I pieced in the two background pieces. In this old block, the lines I drew around the templates are visible, as are the points at which I stopped and stitched a little anchoring stitch or tied a knot where the seams abutted and then continued stitching to the next intersection. 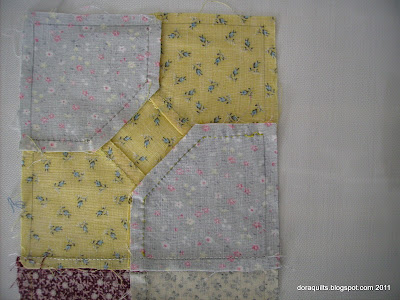 As you might surmise, the traditional method was a lot fussier.  When I quilt the modern version, I use lines of quilting to box in the center "knot", so the final look is very similar to the traditional look.

Here are a few more examples of those 1980's blocks now gathered together with other orphan-blocks and pieced into a sampler quilt for my daughter. 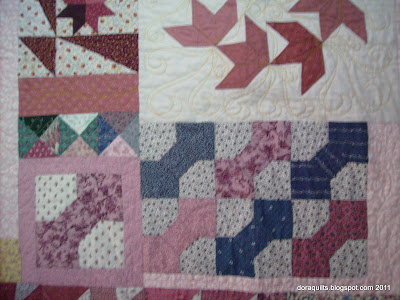 Quiltmakers used many different settings for these blocks, and some even used much smaller center squares.  I find this proportion with a center knot half the measurement of the longer sides of the bows most pleasing, so that is what I've used most often. (It's what my grandma used back in the early 20th century too.) 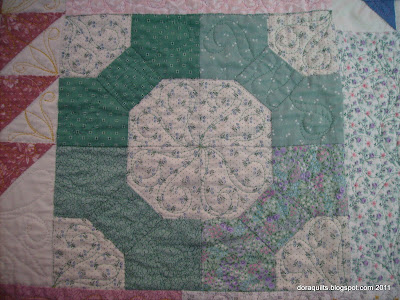 To save you from having to do the math, here are some oft-used block sizes and the  sizes to cut the squares for the "modern" version. We cut four larger squares (two for tie, two for background) and two smaller squares (for tie) for each block.  If repeating fabrics in a quilt, we can start with strips cut to these sizes and then sub-cut them into squares.  (Saves a lot more time.)

Back in the 1990's I made three inch blocks using this modern method (for a quilt for Lydia Devereaux when she was not yet born).  It would have been much too fussy to do the traditional method, but this modern method made it a cinch--and gave me plenty of time to focus on my favorite part, the quilting....Wait, when it comes to bow tie quilts, every step is my favorite part.

If you try these, I'd love to see pictures!

Here is a picture of one of my early bow tie quilts (from the 1980s--complete with fabrics that did not retain their colors because the fabric companies insisted 20 hours of light fastness was more than enough). 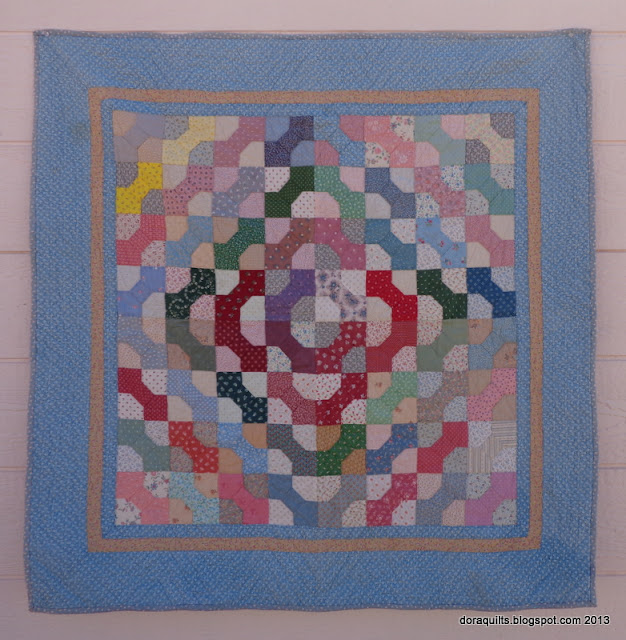 P.S.:  I just learned that Baby Bows is featured in the July/Aug 2011 issue of McCall's Quilting.  For the traditional pattern in a three inch block, the pattern be downloaded as a .pdf here: http://www.mccallsquilting.com/content_downloads/Baby_Bows_Web_Bonus.pdf
These would make a great carry-along project.  (In fact, that's how I completed many, back in the 80's.)

P. P.  S.: 7/21/2011 I came across the first bow tie quilt I made back in the 80's - 4 inch blocks- and was going to photograph it and add it to this post.  Instead, we had a thunderstorm--that means lightning and thunder and very little moisture--and the power went off, etc.  But I just happened to come across three other "modern" Bow Tie's.  Here are links to other people's blogposts:
http://www.redpepperquilts.com/2011/07/bow-tie-quilt.html
http://fussycut.blogspot.com/2011/05/finished-habitat-bowtie-quilt.html
http://twinfibers.blogspot.com/2011/07/vanilla-blooms-quilt-top.html

I've only made these once. It was my 4th quilt. I'd never heard of set in seams, or else I wouldn't have even tried these. I just figured it out on my own. I'll have to take pictures of the quilt again when I go to Texas in September. I made it for my inlaws. Nice tutorial.

Thank you! I wondered how to make these. I really like the ones set in a circle. On my list!

thanks for showing how the 2 sections of the block look the same but are turned differently . This will make organization easier when I finally get to tackle my own bow tie quilt.

I have a great scrappy bow tie quilt I picked up at a yard sale for $5!
Thank you for the tutorial!