Fil-Tec Glide thread is on sale this weekend.

This shade is Bright Gold 80137.  It's the last gold on their chart at the above link.  It's one of my favorites because it looks great on a huge range of fabric styles and colors.  It comes in 1,000 yd and 10,000 yard spools.  Lovely shine and glisten that makes the quilting even more beautiful.  All my machines love it.

I often use a contrasting color of Glide on the back of my quilts, but not always.

I do much of my piecing and sometimes subtle tracing or background quilting with this thread: http://www.bobbincentral.com/bobbinline.html

The link for the sale of glide thread is http://www.bobbincentral.com/glide.html?whence=

No, I don't work for the company; they're hundreds and hundreds of miles from me.  Just love, love, love their thread! 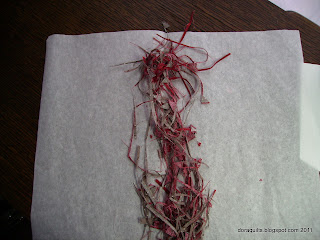 What is this mess?  The trimmings from squaring up 48 half-square triangles.  Next time I'll use my old Omnigrid triangle rulers.  I forgot how much I dislike trimming squares. 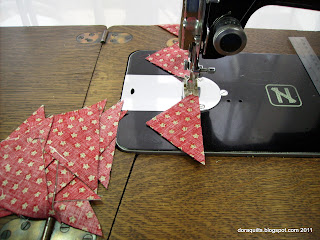 Piecing done on my lovely vintage Necchi BU on the treadle from a 1919 Singer 66.  (I do still have the Singer 66, and it works fine, so I should find someone who would like to use it.) 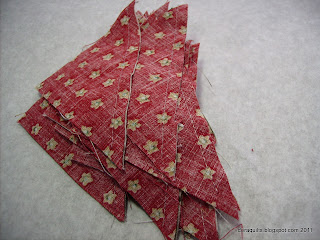 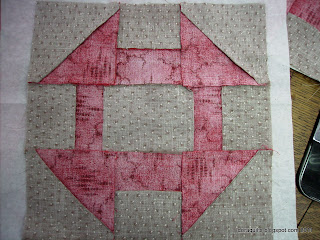 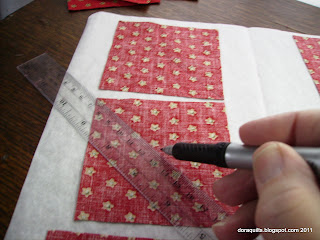 I drew diagonal lines across 24 squares.  (They're resting on a sheet of 12" deli paper.  I love that stuff--for sewing and organizing as well as in my kitchen!) 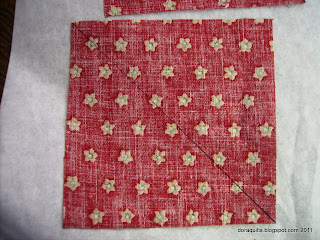 I placed those squares on opposite sides of an un-pieced square and sewed on the line. 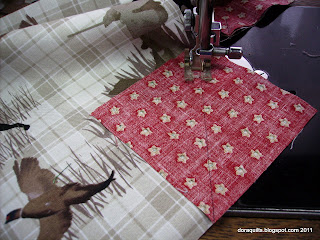 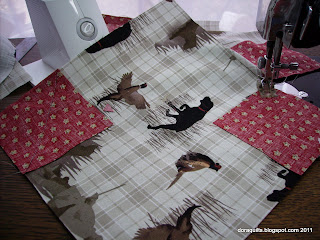 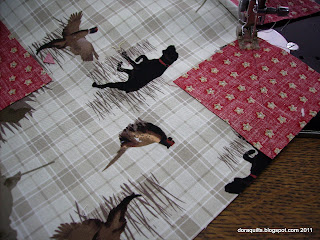 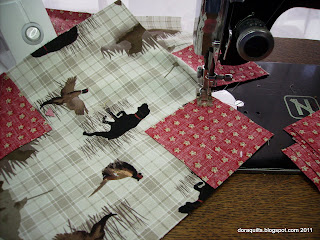 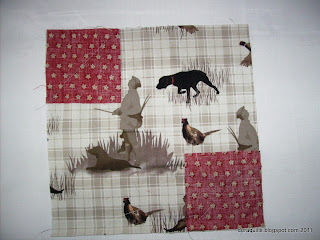 ....Over and over again....
I love the hunting fabric, a gift from my dear friend Mary.  (It was a JoAnn's Fabric exclusive several years ago, but until this inspiration hit, I couldn't figure out how to use it.) 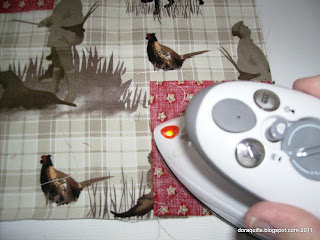 Pressed the seams with my favorite itty-bitty steam iron--at least it's my favorite for piece work. 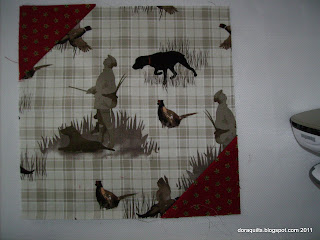 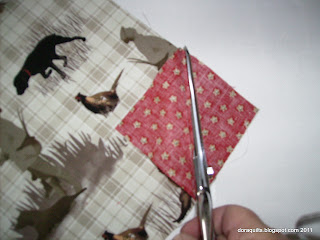 Trimmed--I often sew a second seam a scant 1/2-inch to the right of the line before trimming--not sure why I didn't do that before trimming this time. 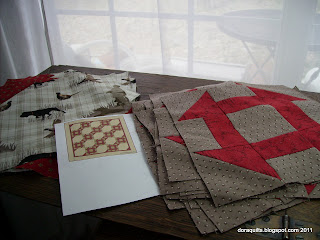 Lay out the plan.  Lay out two stacks of blocks. 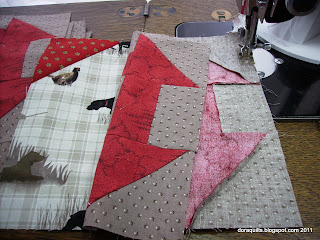 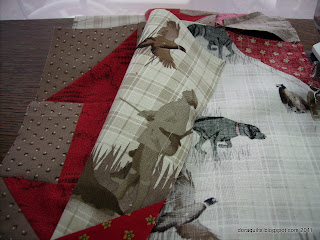 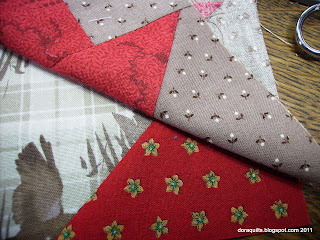 Check to be sure seams of blocks align.  The red in the Lincoln's Platform is a Robin Pandolph from several years ago. The little flowered red is a Peter Pan--I'm wondering if it was left over from a shirt I made for my father many years ago.  The beige tiny flower is from the 1980's when it was still hard to find 100% cotton for quiltmaking. 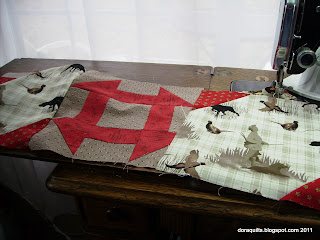 Build the rows and piece rows together. 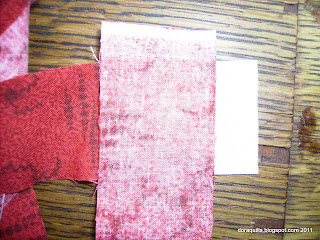 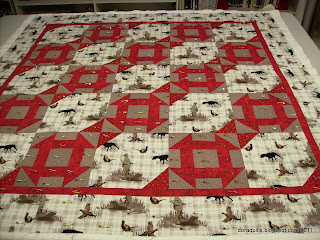 Layer and baste with a few hundred pins.  (Pin basting because I took it to church to baste at our Victory Quilt meeting, and I didn't feel up to carting along the boards I use when basting with Sharon Schamber's thread basting method.  In hindsight, her method is faster--and is featured on you-tube.) 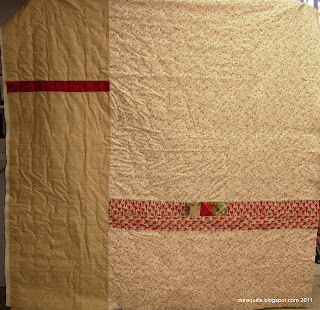 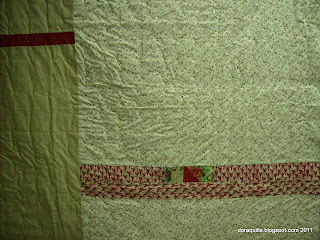 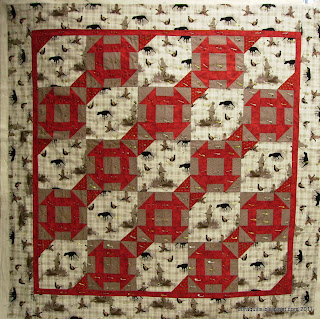 Ready for quilting.  Makes me nostalgic for hunting season on the farm in Illinois--although I usually stayed inside since there were always a few poachers who thought a hunting license entitled them to free game from other people's land and that they didn't even have to ask permission to hunt.  One year those poachers even included the president of one of the El Paso banks!
Guess I'd better get busy quilting and see how many more memories I recover!

Most often our Thanksgiving dinners included pheasant. On one of the little country roads near my work, I've seen a pair of ring-neck pheasants each day for the last several days. I don't even know if there is a pheasant hunting season here in New Mexico.

Hope your Thanksgiving Day is wonderful!

Thank you, to all the veterans and their families who have sacrificed so much for us.

My earliest memory connected with Veterans' Day is of the ladies in our small town who without fail sold paper poppies around Veterans' Day and Memorial Day. 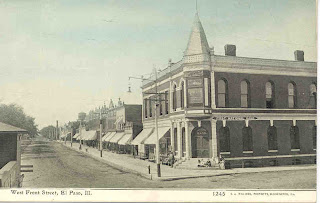 My grandfather, who was of the generation that was needed on the farm during WWI and too old to fight in WWII, always purchased a poppy when he went to town during the times they were being sold. I remember dusting the floor in his bedroom and always seeing several on his dresser. My father was a decorated veteran of World War II who seldom would talk of his experiences except with other veterans of the same era. My nephew recently returned from Afghanistan. As much as I value their service, I also honor the families who have sacrificed so much to enable their loved ones to serve.

[The photo above is one many that can be found at http://www.elpaso.net/~bank/ thanks to several small-town, very dedicated historians.]

Postscript:  It's been a perfect Veterans' Day--the sky gray with grief all day.  November is a difficult month for me because so many people who have been incredibly important in my life have departed this life for the next one during Novembers.  I'm hoping I'll be back on an emotionally stable footing for Thanksgiving, one of my most favorite celebrations.
Posted by Dora, the Quilter at 11:25 AM 4 comments