I lucked onto some orphan pillowcases this weekend.  I have no idea why these gems call my name so clearly unless it has something to do with the fact that I've loved textiles since I was a toddler--maybe even earlier and I just don't remember!
So, I'd like to share a couple with you.  The first made me sad.  The lace I absolutely love.  I think if I go dig out one of my grandma's bed sheets, it will have this same filigree lace pattern from the early 20th century. 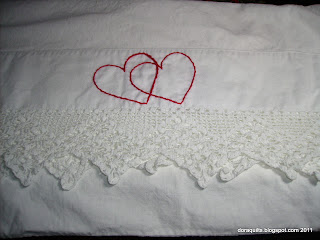 Of course, I have no way of knowing when someone decided to apply a couple of floss embroidered hearts--I'm kind of hoping it was an eight-year-old. 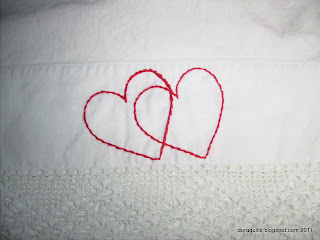 Fortunately, the cotton floss was color-fast--maybe some of the J. P. Coats Boilfast floss from the 1940's-60's?  It was stitched with 3 ply of floss except for the thick part on the right side of the left heart, which was stitched with four-ply. 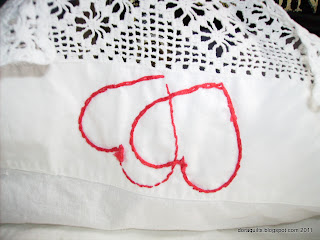 And there's the back--great big knots.  The other negative is that instead of opening the hem, it was stitched through both layers of the hem. 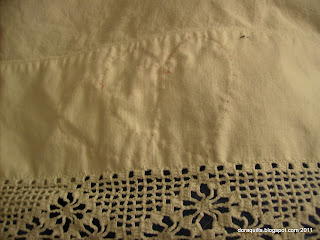 This is what it looks like now.  I'm hoping that after another laundering there will be no evidence of the embroidered misadventure--although I may go ahead and use it first. The saving grace is that the hearts were stitched with a small enough needle that the stitches will close up in the laundry.
In contrast, one of the "orphans" has some of the most exquisite embroidery I've seen. 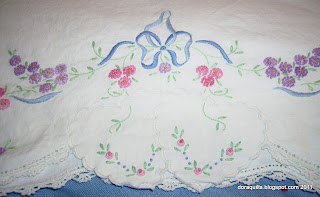 Here's a close up of one of the little hearts outlined in beautiful buttonhole stitch. 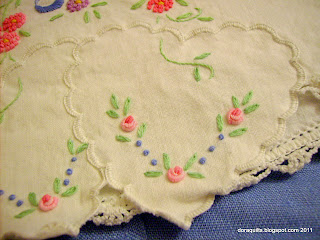 The embroidery on this case was done with two-ply of floss except for the stem stitch and satin stitch, which were done with one. 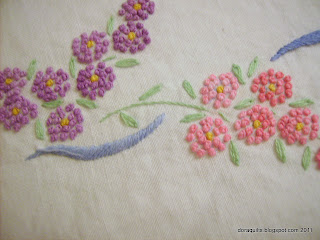 The only knots in this piece are the French knots and the bullion knots in the roses. 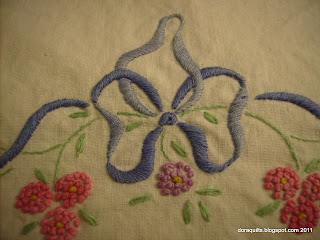 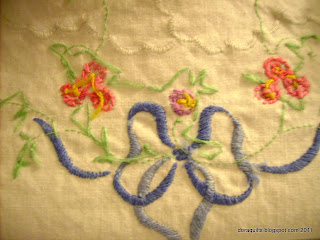 In the above photo you can see that the back is almost as neat as the front. 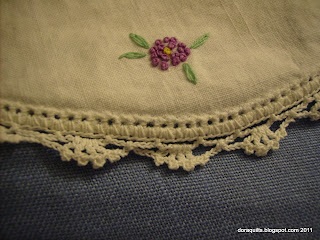 The lovely little crocheted edging was applied in the edge of the hand-sewn hem stitching. Unadorned pillowcases could be purchased with gently scalloped edges.

This maker used delicate one-ply pearl cotton (I'm guessing size 8 or 12) to create the outline of the hearts in buttonhole stitch and then trimmed the fabric away next to the stitching at the bottom of the hearts.

I adopted a few other orphaned pillowcases too, but they're going to have to spend a good part of the week with "Aunt Oxy."

And here's the other much longed for treasure: 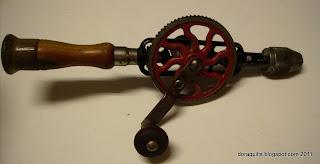 I don't even know how many cordless drills I've had over the last couple of decades.  The most outstanding trait of all of them was that when I needed them, the batteries were run down and most often I had trouble getting them to take a charge.  My dear friend who works at Lowe's assured me there's a clip at the bottom of the handle so that I can remove the batteries when not in use.  I bought mine as a Father's Day gift to myself a few years ago, and the only way the batteries are coming out of it is if you remove every screw--and then the batteries aren't replaceable.
Consequently, I've been longing for my Grandpa's hand drill--which is somewhere in one of my many boxes in an outbuilding.  Hmmmmm.  How much time do you think would be wisely spent searching through boxes in an out building in 95+degree heat?  I just couldn't face it.  I decided I'd be better off just buying a new drill and then decided what I really wanted was an old drill. After all, I use People-Powered-Machines for sewing, so why not for drilling? The local hardware store owner told me he could order me a hand drill.  I decided to look for an old one--partly because most of them were made with beautiful hardwood handles. I looked at every antique store I could think of and found this one at an antique store about two or three miles from home.  I suspect it was overpriced, but it was still about 20% of the cost of a decent new plastic wonder. 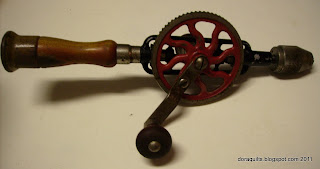 Okay, now I can install that sliding metal drawer in one of my cabinets so that my lovely DeMarle cookware won't fly out at me every time I need a piece!
Posted by Dora, the Quilter at 3:38 AM

I don't think I've ever seen a people powered drill. I think I'd like it better too. I am finding more and more that I like hand sewing over machine. I haven't attempted quilting yet but will be soon. I think I'll like the control. I am not good at machine control. I need to get out more and look at antiques like that cool drill!

Hi Dora! Thank you so much for the recommendation on using fine thread for piecing. I didn't know that. I will check and see what it is I have. The block I completed today was fine so my guess is that it's me. Blessings!

Love antique pillowcases too.I starch them and place them with other pillows as to stack them up one in front of the other ---has the look of a B&B!!! :)Yours are beautiful Thanks for sharing!!!