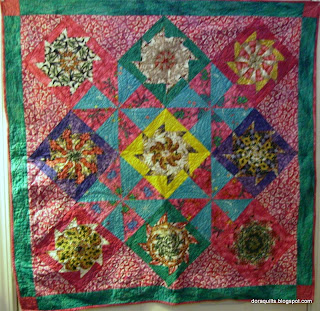 Alex chose the two main prints for this quilt when she was just over two years old. We purchased them at a quilt shop that was located in an old train depot in Flagstaff. 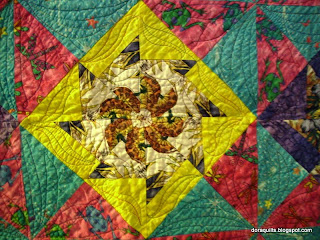 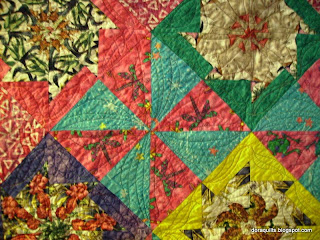 The other was a frog print that also featured dragonflies. The frogs and dragonflies became pinwheels. 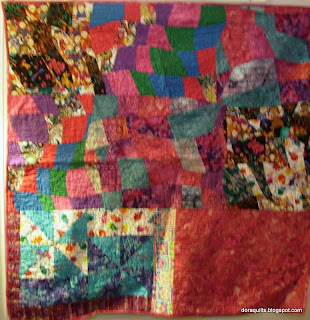 The back of the quilt was a repository of all kinds of wild patchwork leftovers.

Alex napped under the quilt, played on top of it, enjoyed it for months.  Then one day she realized it had frogs on it.  She no longer liked it--and rarely touched it, let alone considered using it.  All because of the frogs.  By that time she no longer remembered having chosen any of the fabrics.

This past winter when I was looking at some of our older small quilts, I asked her about this one.  She still doesn't like it---because of the frogs, of course! It definitely has a lot of good use left in it! I hope in 20 years or so she'll have a child who thinks frogs are okay!
Posted by Dora, the Quilter at 5:21 AM

How funny about the frogs!

I did a stack & whack with a safari print for my oldest. Only by extreme luck I did not wind up with a bunch of animal butts as a block! Of course he probably would have loved it. Someday frogs will be back in vogue for her.
Kristina