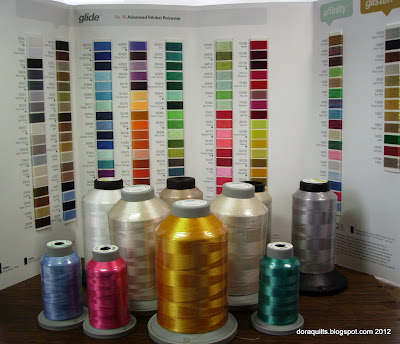 My new threads are here!  I ordered these last weekend, but for some reason something on my card caused a problem, so I received a personal phone call early Monday morning. (I think what happened is that I keyed in my phone number and missed a digit.)
I ordered several shades of Bobbin Line for piecing and stabilizing--and background-quilting.
I ordered some small spools and large spools of Glide Thread, one of my very favorites for quilting.
I ordered, among others, a cream and a pearl--I think I could have been just as happy with just one, but they will get used.
Then I ordered a couple of their mini-spools.  Mind you, their "mini-spools" are 1,000 meters, so they are mini only in comparison to their 5,000 meter spools.

Then I ordered a spool of their Affinity--which is the same fiber and denier as Glide, except in variegated colors that change every inch. 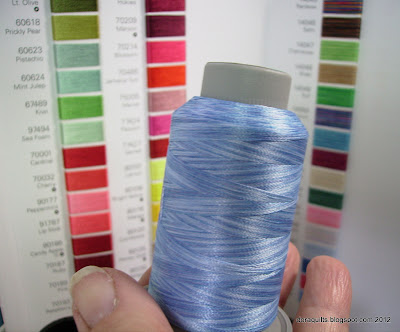 I ordered a new color card, because my old one is several years old and contains only Glide colors.  The new card includes affinity and glisten, which is their metallic thread.  I have not tried their glisten thread because I almost never quilt with metallic thread anymore.

Some of their shades of Bobbin Line now are put up not only in 3,900 yard spools, but also in "large" spools.  Large spools have 8,200 yards!

I like to match my top thread to my bobbin thread, so I usually wind my own bobbins. However, some day I'm going to be quilting several quilts with white thread, and I'll splurge and order some of their pre-wound bobbins. Their smaller [L-type/size]  Magna-Glide bobbins are wound just on a magnetic core but they work just great in my vintage class 15 bobbin cases.  I can attest to that because once they posted on Facebook that they were giving some away and sent me one of each type.  I looked at it and thought, I'm not so sure that will work.  A few weeks ago I needed a few more inches of thread, popped in the Magna-Glide bobbin, and it worked great.  The idea behind the magnetic core is that the thread will come off the bobbin very evenly with no jumps or glitches in the bobbin tension.  And they do, even on old vintage machines!  How cool is that!

(And, no, I don't work for them.  But I do love the fact that they are a North American company and all their manufacturing is done here--and that they have great customer service!--Oh, yeah, I love their threads too!)

Okay, I'm re-charged now, so I'm going to swap out the old, slightly-strange Necchi, and put my Singer 15-88 back in (more harp space), and start on Judy's Red Roses prayer quilt.
Posted by Dora, the Quilter at 2:27 PM

I'll have to try your thread sometime, I remember you mentioning it once before. Happy sewing at your place!
:-}pokey

I can't sew a stitch but came over from Sew Many Ways to look around and say hi! I love your quilts and those threads are beautiful too. :)

Thanks for visiting and commenting, Laura. I'm glad your like my quilts!

I have never heard of that thread, I'll have to check it out, thanks for sharing!