I can't believe I finished this quilt top in a weekend!  Of course, I did not finish the laundry and some of the housework!

(I  need a design wall, but I no longer have a good place to put it.)

The four patches were pieced from a charm pack of  Northcote Range (Moda) in 2012.  They were done shortly after the assault/brain injury, and I don't know why I didn't finish them sooner, except that life became even more complicated, and I just persist in designing quilt after quilt in my head, and it takes much, much longer to create a real quilt. 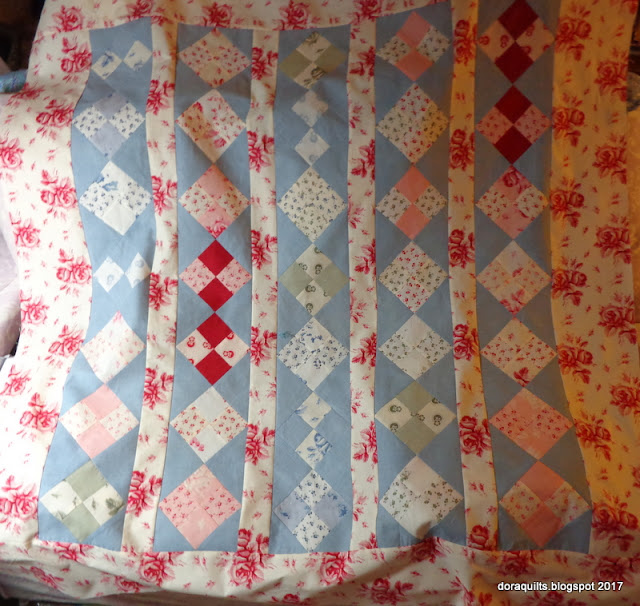 This did take many more hours than I would have predicted. 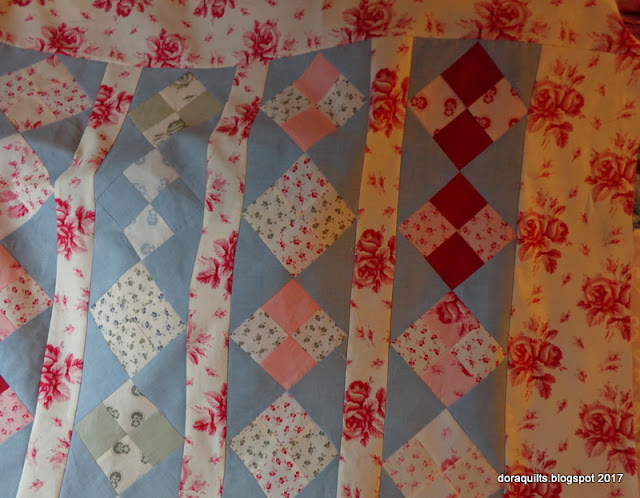 The four patches include all but a few of the charms from the pack, because the stripes were large and wouldn't have worked.  Five strips of seven 4-patches.  The rose on white strips were cut 2.5 inches, and the borders were cut six inches. And now that it's all assembled, it still reminds me of quilts from my childhood, except that where I grew up in the Midwest most of the quiltmakers at that time would have used a solid white instead of the rose print.  I just love that rose print.  I also have another pack of the charm squares, but not enough of either the blue or the rose print to make a twin to this quilt.  It's about 46" by 56", and will be smaller after quilting. I don't have yardage that will work for the back (imagine that!), so it will be a while.

It's so quietly sweet and simple. So, I'm naming it Simply Sweet. 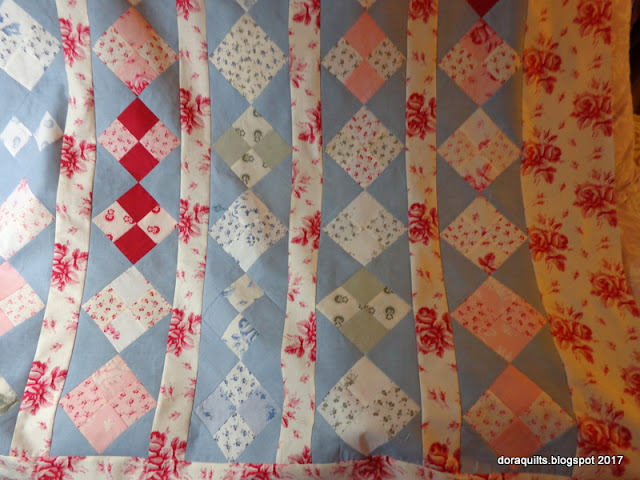 While it's just the top, I'm going to count it as my first finish of 2017.  It was good to focus on this quilt top instead of other things, like the national news, for example.  (I'm pretty sure there has never before been this kind of ugliness this long after a Presidential election within my lifetime.) And while I was praying for whoever will receive this quilt, I'm also praying for my 20 year old nephew Thomas who's been hospitalized in Houston.  So, good use of my weekend.

Back to work tomorrow, and expecting more winter weather.

I linked to Freemotion by the River, Let's Bee Social and My Quilt Infatuation.

I hope to have a quilt finished soon in 2017. Great job! It truly is Simply Sweet! I hope your nephew recovers quickly

A quilt top counts as a finish to me. Hope your nephew gets better quickly. Yes, this election season has been really ugly. People need to learn to get along, and back off. My mother taught me that if you can't say something nice, then don't say anything. It should be really quiet up here, near Chicago (but it isn't, of course).

What a lovely little quilt top. Sometimes simple is the best idea. It sure worked for this project. You could use the other charm pack with different fabrics and make another quilt top not to match but to be similar. It's just so pretty.

I love that quilt, the rose fabric is beautiful! I pray your nephew gets better soon. Could you share the pattern for the quilt blocks you used to make my quilt? They look like giant snowballs to make a flower.

What a sweet design and quilt top, I love it.