Decades in the Making! 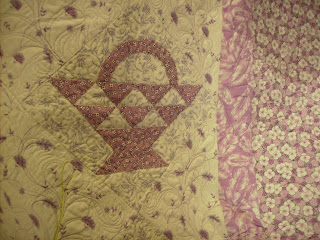 I just finished the binding on a quilt that was decades in the making.
When I was about ten, my mom pulled out a basket quilt made by my maternal grandmother, Dolly (Dora) Maude Shreve Scheer sometime before her death in 1932.  Grandma's quilt was of solid violet pieced baskets on a solid white "Cloth of Gold" background.  My parents wore out that quilt; it eventually became a mattress pad and, undoubtedly, went on to become other things too.
I loved that quilt and determined that when I grew up and made quilts, I would make a violet basket quilt too.
When I get a chance, I'll take a better picture of this quilt, even if I have to put it on a bed to do it!
Because Dolly's quilt has been only a memory for several decades, this one had other sources of inspiration too.
The set is from a Crown of Thorns quilt made by a Mennonite quilter in Kansas that I saw back in the early 1980's.  I began collecting fabrics for this quilt in 1992--the first piece was purchased at Ben Franklin in Prescott, AZ.  I finally began piecing it in 2002.  I thought it would be finished in 2007--in fact, that date has even been added to the quilt.  But I just finished putting on the binding today!  So, it was a long, long time in the making!
I applied the binding with my Singer 66 Redhead treadle late yesterday afternoon.
I hope the belief that sleeping under a new quilt brings the sleepers good fortune proves to be true.  Whether or not it's true, sleeping under this quilt will be a joy!
More pictures later.......

Post script: I’ve since learned that my grandma Dolly’s middle name may have been spelled “Maud,” and when she died in 1931, my dad was just over a couple of months of turning ten. He always told us he was eight at the time, but that could have been when she received her cancer diagnosis, and it may well have seemed to him that his life was on hold. I do know my grandpa was devastated and frustrated because she refused medical treatment because she had embraced Christian Science.
Posted by Dora, the Quilter at 5:22 AM