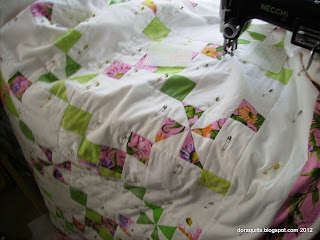 Spring Breeze was layered and pinned at least a week ago.  I used many fewer pins than I usually do because I decided to do quite a bit of stabilizing quilting. 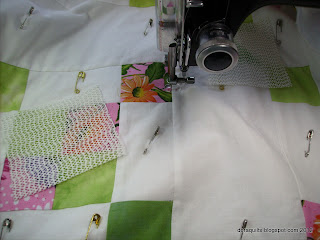 I used Fil-Tec's Bobbin line thread for both the upper thread and bobbin thread, so the stabilizing is barely visible. 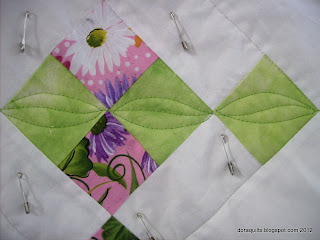 I found an older spool of bright lime green to quilt some leafty things. 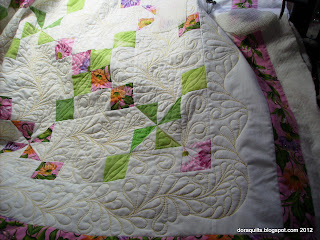 Then I quilted the body of the quilt.  I was so happy when I finally reached the big white boarder.  But I've only managed to get a few minutes here and there to work on it. 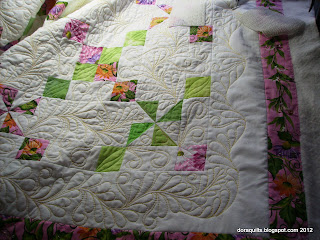 So....I now have about 1.75 white boarders to finish and then four of the narrow pink outer borders.

Addition to Post:  This is being quilted on a Necchi BU from the 1940's that is in 1919 Singer treadle irons.

I'm still hopeful I can finish this, write a new post, and share it a couple more places within the next few hours.

Sweet Teen is visiting a friend, so I'm just sharing my place with the wind and some smoke from the fires in the Gila and Manzanos. We noticed the fire in the Manzanos yesterday evening as we were driving Sweet Teen to an FFA Officer get together.  It was reported that it was set by a couple of boys who got separated from their party and wanted to be found. Later it was reported that it was set by a group of 11 boys, fresh graduates of Belen High School.  Hmmmmm.....lost in the forest, high winds, fire-setting.  Gotta question that logic.  I understand the boys may be charged--and, if so, their parents will be charged with the cost of fighting the fire. I read a report the the fire is contained and being monitored for hot spots. There is a crew of about 80 still monitoring--and the wind is still pretty wild here (about 25 miles or so from the fire).
Posted by Dora, the Quilter at 7:43 PM

Dora the quilting is just beautiful, and I love the colors/prints in the quilt. Hopefully that fire will stay out.

Hi Dora - love the quilt! Those fabrics are beautiful, I love the greens and pinks together. Your quilting is fabulous - love those feathers! I hope the fires are out - how scary!!

Love the quilting, Dora. It is just fantastic!

What a gorgeous quilt and the quilting is fantastic!