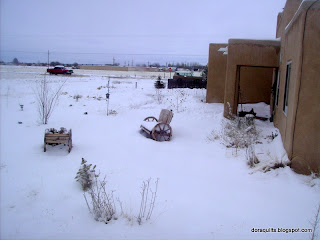 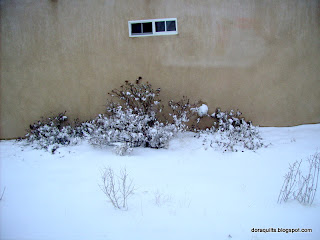 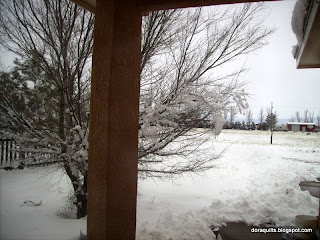 But looks can be deceiving--and in this case, they are.

When my morning class was excused, I checked the weather and NMRoads.com (because snow was predicted, and where I was, we'd had rain and snow flurries). I learned I-40 had already been closed.  When that happens, the only alternative for 40+ miles is Old Route 66.  I left work as soon as I could, but I still spent well over an hour going just seven miles.  Apparently, Old Route 66 was also closed at least for a while.  However, there were a lot of people trying to get home to their kids, who had been dismissed from school much earlier, so eventually they let us through! (I learned later that there were buses that had been forced to return to schools because the roads were impassable in places.)
I always think of my home as being on the plains east of the mountains.  But after that trip home, I recognize that while "East Mountains" doesn't quite apply out here, we have way too many steep hills to claim we live in a flat area, even if it does seem that way after having traveled through the mountains. There was some evidence NMDOT was trying to clear the highways, but they weren't able to keep up.  Seeing a snow plow sliding all over the road was kind of scary too.  Oh, my! I prayed my way up every hill, knowing that if I didn't make it on the first try, I'd end up in many more inches of snow in a ditch!  My town looked like a parking lot for semi-trucks.  Someone said the reason they worked so hard to get the interstate open again is there were no more motel rooms left in our town. Really? Our city road department was working valiantly to keep the streets passable. (I did call the city to tell them how much I appreciated how hard they were working.)
After nearly three hours in transit, there is a whole new meaning to "home, safe and sound." However, I'm getting pretty tired of snow and ice caused closures.  Even Alexandra was upset that school has been canceled for another day.
No chance of school being closed where I teach--it will take a miracle for me to able to drive there.
Posted by Dora, the Quilter at 4:55 AM